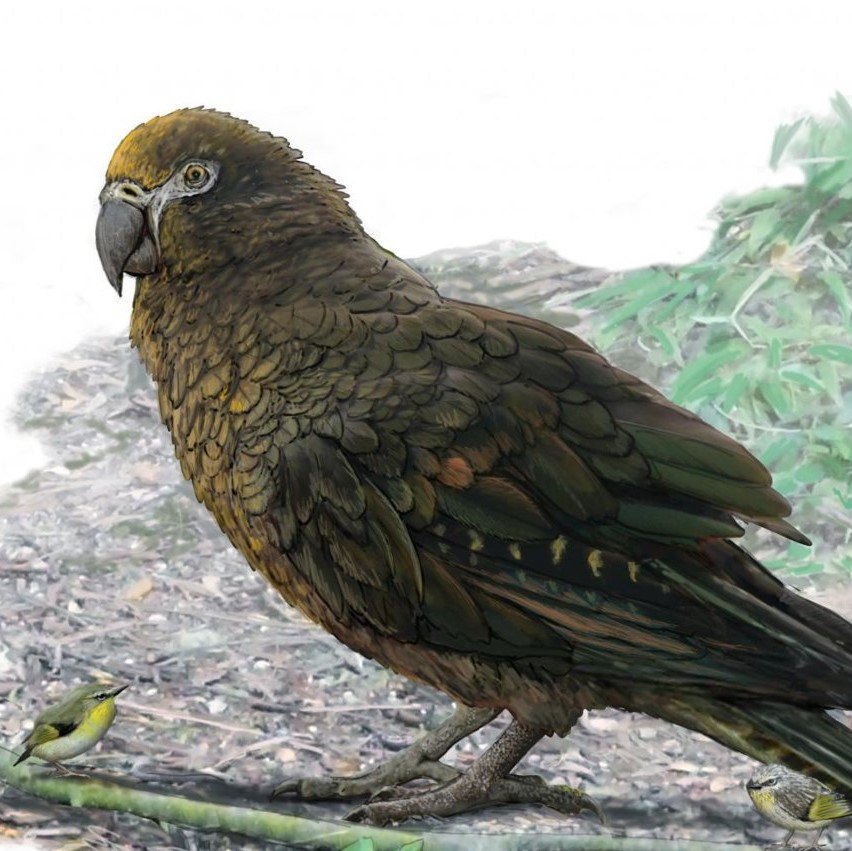 Over the years, we have been systematically schooled in the reality of dinosaurs and larger-than-life creatures that once existed. These creatures have long died off, leaving only bones and fossils to detail to us of their existence. For reference points, we’re used to huge Tyrannosaurus Rex, Stegosaurus, and Brontosaurus species. For birds, we are quite aware of the large Pterodactyl.

These days, while we still have some giants in our midst (think whales, and elephants), many of creatures alive today are smaller than the size of a person. Bird lovers are amazed at the size of an exotic bird like the hyacinth macaw. We even know, although we may have never seen one, of the critically endangered, and large but flightless Kakapo parrot of New Zealand. But New Zealand has the history of another exotic bird that is considered the largest in the parrot family to have existed.

Recently, the previously extracted leg bones of such a parrot have been revisited for a closer look. Interestingly, what was once thought to be the remaining bones of an eagle from long ago has taken on greater meaning. The bones, which were discovered in 2008, are now realized to have been those of a massive parrot. Surprisingly, it was also a relative of the cautious Kakapo parrot. In size, the bones reveal a parrot that stood around 3 feet, 3 inches in height, and weighed an approximate 15 pounds. The new parrot discovery has been scientifically named Heracles Inexpectatus.

Getting to Know the “Hercules Parrot”

The Heracles inexpectatus lived millions of years ago and is assumed to have lived within the time framework of the Lower (or Early) Miocene period. As a nickname, this newfound parrot is being called the Hercules Parrot, and nicknamed “Squawkzilla by an involved paleontologist. Like the Kakapo, the Hercules parrot was likely flightless. Its diet was probably fruits and plants, although given the bird’s size it is also possible that it was carnivorous. It might even have fed on parrots smaller than itself. Closer study of the unearthed evidence that yielded the bones may eventually disclose what the giant bird may have feasted on.

To fully understand this new discovery, scientists and other studies will need to further explore the regions from where the bone fossils were extracted. The hope would be that other possible yields will be rich with more information thus completing a new discovery in more satisfying detail. Further, it’s possible to discover more bird species that we are unaware of.

Imagine a parrot that stands as high as your hip. Then imagine its needs, both dietary and environmentally. That should easily give you an idea about how large Squawkzilla was.

Millionaire trophy hunter, 68, is caught boasting how he helped to shoot 13,000 doves over four days on trip to Argentina
Audubon Chapters Taking Local Action for Birds and People in the Arid West
Kitten with So Much Sass Trills Her Way into Hearts of Family
To Raise Awareness, Some Colombian Birders Won’t Participate in Global Big Day
Efforts to Help Greater Sage-Grouse to be Restored by Biden Administration