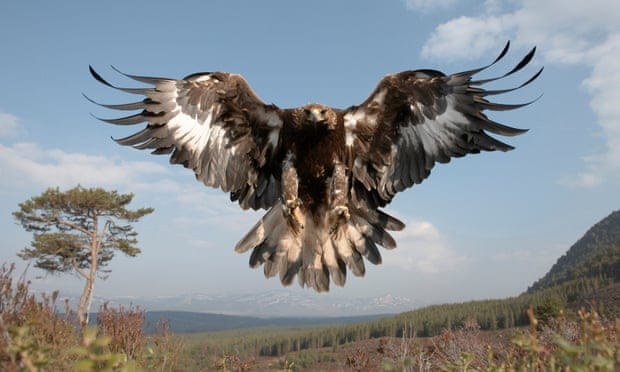 Somewhere bleak and unforgiving in Scotland, a golden eagle is suffering an agonising death. The young bird of prey was photographed last week with a metal trap clamped around its leg in the Crathie area of Deeside in Aberdeenshire.

The tourist who took this distressing image sent it to the police who expressed serious concerns for the eagle’s welfare and an appeal was made to the public.

The territory of a golden eagle is vast, so the chances of locating it are at the non-existent end of remote. The creature faces a long and painful demise, struggling to free itself as its leg is slowly shredded. Somewhere on one of Scotland’s vast shooting estates that have been annexed for the exclusive use of the world’s richest people, one of their local lickspittles may be reflecting on his handiwork: perhaps the bolts and screws will need to be tightened next time.

Some of these estates were taken at around the time of the Reformation, as marauding aristocrats, exploiting the chaos and turbulence of religious and civic upheaval, seized them. Assorted laws were hastily enacted to thwart any future attempts at redress or restoration. It’s why the pattern of land ownership in Scotland remains fixed along feudal lines and why more than half of Scotland’s land is owned by fewer than 500 individuals and their families.

The cost of maintaining these lands is largely met by turning them into themed killing fields for moneyed adventurers. These people pay tens of thousands of pounds for the pleasure of shooting the wild creatures bred purely to satisfy their bloodlust. Nothing is allowed to get in their way and that includes Scotland’s grandest birds of prey.

Research commissioned by the Scottish government in 2017 and conducted by Scottish Natural Heritage found that almost a third of golden eagles tracked by satellite died in suspicious circumstances. In the majority of cases, the eagles were found on land intensively managed for driven grouse shooting. The report studied the movements of 131 young golden eagles over 12 years and concluded that a relatively large number of the 41 that had disappeared “were probably killed”.

The government’s response was well-meaning but cautious and included its favourite mechanism in situations in which it doesn’t like to take sides: the “independently led group”. There were also pledges to “look at” some things and to “review” others. Crucially, it ruled out granting the Scottish SPCA extra investigative powers on “legal advice”. Meanwhile, the slaughter of our golden eagles continues.

Last month, two satellite-tagged birds disappeared on a grouse moor on the Auchnafree estate in Perthshire. An intensive search of the pair’s last known locations found no trace, suggesting that they had been killed. The eagles, called Adam and Charlie, were being monitored by the broadcaster and naturalist Chris Packham, along with the Raptor Persecution UK website, as part of a study into the movements of young golden eagles in Scotland. Their satellite tags, which had been working perfectly, each suddenly stopped two miles apart. Raptor said there was no evidence that the estate was involved and the estate itself appealed for information.

Hen harriers are also regarded as inconvenient competition for the rural cowboys on driven grouse moors. Last month, a satellite-tagged male hen harrier died after being caught in a spring-loaded Fenn trap – near a nest on the Leadhills estate in South Lanarkshire. The female was missing and a Fenn trap was found in the nest alongside two eggs. The estate condemned the killing and said its staff were not responsible.

It is estimated that up to 700,000 grouse will be killed between the start of the shooting season last week and 10 December, when it ends. In an article in Walk Highlands magazine, the writer and photographer David Lintern wrote: “There’s a culture of killing here that looks very much like a cult and it’s not remotely sustainable in environmental terms.”

The methods deployed by estate managers to protect this lucrative trade include an assortment of sinister and insidious laboratory techniques. These include medicated grit fed to grouse to reduce the incidence of worm parasites.

Measures to prevent it passing into the wider food chain are easily bypassed and the factory grouse population is thus better protected. Nothing can be allowed to stop the flow of big money circulating throughout this industry. A day’s shooting can cost several thousand pounds and works out at around £75 per grouse.

To maintain the artificially high numbers of red grouse, heather is burned and wet areas drained to encourage the growth of mixed species of plants for the birds to eat.

All other natural predators are ruthlessly eliminated and then the lines of beaters start their work. Armed with whistles, they drive the birds on to the waiting guns of the weekend warriors who can’t really miss them as they fly past. At least in the more humane method of “walked-up” shooting, the fewer numbers shot are eaten.

The landed owners of these estates claim that these activities are vital components of the rural economy. This is open to debate, as it fails to consider the seasonal and low-paid nature of associated jobs.

Nor has it considered how these huge expanses of land might be better used for the wider community if they were managed differently to support other businesses. For this to happen, you’d need a reverse land grab and we couldn’t possibly have that, could we?

This article was first published by The Guardian on 18 August 2019.

Support ‘Fighting for Wildlife’ by donating as little as $1.

It only takes a minute. Thank you.