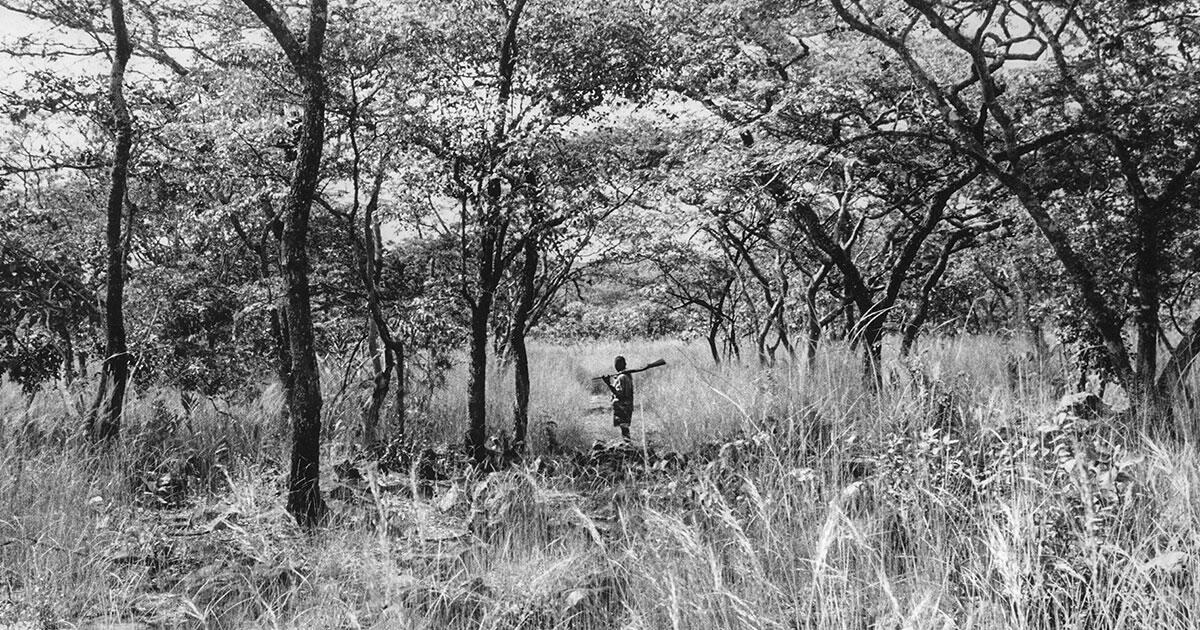 In 1954, the British ornithologist Con Benson decided he wanted a Spotted Ground Thrush for his bird specimen collection, which he hoped might end up in a museum one day. To get one, he would have to travel from his home in Northern Rhodesia (now Zambia) to neighboring Malawi, where the small brown birds with white speckled chests lived.

But Benson couldn’t leave his day job—so he sent his assistant, a tall, slender 30-year-old from Mozambique named Jali Makawa.

Much to Benson’s delight, Makawa returned with not one but two specimens: a male and a female. Writing to a friend, Benson described how Makawa had caught the female in a trap, then heard an unfamiliar bird call. Makawa had mimicked it, lured her mate over, and caught him as well. “It was a great moment for me,” Benson wrote, in a phrase that revealed the colonist’s paternalistic view of his assistant. Even as he wrote about Makawa’s prowess and speed with pride, he couldn’t help but take credit for it.

Benson and Makawa’s lives intersected, in part, because 60 years earlier, Cecil John Rhodes and his British South Africa Company claimed land along the Limpopo River to create the southern African territory of Rhodesia (now Zimbabwe and Zambia). The brutal and exploitative imperial presence in the area opened its resources to foreign governments and their citizens. Western countries extracted wealth from the region in myriad ways, from stocking their treasuries with gold from African mines to filling natural history museums with stuffed specimens of African wildlife and birds.

European ornithologists like Benson eagerly left home to work in areas occupied by the British Empire, driven by desire to make a name for themselves by studying species and ecosystems that were unknown to Western science. Yet, they would not have been successful without the skills and knowledge of native Africans, who helped them navigate the terrain, track and kill elusive species, and prepare the remains for archiving.

Few assistants received credit or remuneration for the work they did, due to “European doubt about the quality of African knowledge,’ says Nancy Jacobs, a historian whose 2016 book, Birders of Africa, documents some of those relationships.

Many African ornithological assistants have been lost to history, but there are records of a few in addition to Jali Makawa. One is Salimu bin Asmani, a member of the Kami people of Tanzania, who worked for several white ornithologists in the 1930s and was known for his keen ability to differentiate bird calls. Another is Saul Sithole, a black South African who went on collecting trips also in the 1930s with white ornithologists and later, despite apartheid, worked for a natural history museum in Pretoria.

Makawa, however, is perhaps the best-known. In addition to Benson, he assisted a number of other European and American ornithologists, contributing to the collections of top curators at the Chicago Field Museum, Harvard’s Museum of Comparative Zoology, and the University Museum of Zoology, Cambridge. Using his sharp eyes and remarkable ear for bird calls, Makawa helped discover and collect new species for those institutions including the White-Tailed Swallow and the Moheli Brush Warbler. “He made his way through a really complex and hierarchical world because of his really superior knowledge of birds,” Jacobs says.

Makawa was a member of a people known by three different names—Lomwe, Nguru, or Makua—according to Jacobs’ research. He was born around 1914 in northern Mozambique. His people trapped francolins, a kind of quail, and also kept canaries in cages. They were also known as skilled hunters, and many of the men owned guns. In 1920, Makawa’s family moved to Nyasaland (now Malawi), which was then a British protectorate. Twelve years later, when Makawa was around 18, Benson also moved to Nyasaland to work as a colonial administrator. Makawa got a job helping in Benson’s kitchen but when he learned of Benson’s interest in birds and hunting, he made it known that he could do more than chop vegetables. He ended up working for Benson for more than three decades.

Benson’s oldest child, Rosie, remembers Jali growing up. “He was absolutely at ease [outdoors],” she recalls. “My father saw that Jali had very exceptional observational powers and that sort of thing, and very quickly began training him to be his collector,” she says. As a child, she would often come across Makawa at a table on the veranda of her family’s house, working on bird specimens. “He wouldn’t let us go up close to him because he was using arsenic,” she says. The chemical deterred insects from eating the birds’ skins, which were then stuffed with cotton so that they resembled a live bird.

In khaki shorts and a matching loose khaki shirt, Makawa came and went from their house. “My father had an office down a passageway that was on the way to the kitchen where he kept the guns and so on, and Jali went in and out of there all the time,” she says. Makawa’s access to the rifles meant he could more easily go off on his own to hunt for down birds that Benson was hoping to collect so the arrangement worked out for both men. Such access to weaponry would have been unusual in those times and suggests a rare degree of trust. The white colonists were vastly outnumbered by local people, and in general, they feared uprisings.

At times, Makawa worked with other Western ornithologists such as the American Melvin Traylor Jr., who started the Chicago Field Museum and collected bird specimens for it. Makawa impressed Traylor with his hunting skills. He also assisted Arthur Loveridge, who was the curator at Harvard’s Museum of Comparative Zoology from 1927-1957. Loveridge was taken with Makawa’s talent with languages—in addition to his own language, Makawa spoke several others, including English and Swahili—and his uncanny ability to mimic both birds and people. “He nightly entertained his companions with reminiscences and impersonations of the people encountered during his extensive travels,” Loveridge later noted.

Robert Payne, a retired University of Michigan ornithologist, hired Makawa for an expedition to northern Zambia in 1972 with Robert Dowsett, of the Livingstone Museum in Zambia. As an expert collector, Makawa had a different status than cooks, porters, and camp servants. Still, Payne remembers that Makawa often cooked the group’s nightly meal of beans and cornmeal. Payne has a photo of Makawa tying down gear on top of the group’s Land Rover; the image, he wrote in an email, “shows Jali doing most of the hard work.”

Makawa was about 55 during the trip, and his reputation was well-established by then. John Colebrook-Robjent, a Zambian ornithologist, told Jacobs that Makawa “was reckoned to be the number-one African collector of the continent.” In Makawa’s later years, the scientists he had worked for helped him find a comfortable position on a private estate, a job that eased him into retirement.

Makawa did get some credit for his work. He was cited in some of Benson’s academic papers, and several avian subspecies named by Benson and Traylor honor his work, such as the Whitechested Tinkerbird (Pogoniulus makawai). But the fact that he was a special case—and there is a living record today of his contributions—only highlights the largely unknown and uncredited labor of other field assistants throughout much of Africa. “That an ornithologist in colonial Africa would name a species or subspecies for an African assistant shows the ornithologist was liberal, relatively speaking,” Jacobs says.

No one knows how Makawa felt about these species bearing his name or his role on any expeditions. He left behind no written records to explain how he felt about anything. But there are photos: one of him holding a live Red-billed Hornbill in one hand, his dark eyes staring intently at the spotted feathers along its wings; another of him as a skinny young man in shorts and a button-down shirt posing with a group of women in traditional attire; yet another of him at a campsite, holding a rifle, face half hidden in shadow, a touch of gray at his temples.

One of the most poignant shows Makawa standing in the miombo woodlands in Zambia, under the Brachystegia tree canopy, a birding rifle slung over his shoulder. Payne took the photo in 1972 but Makawa is not posing for him. Instead his head is turned away from the camera, toward the tall savanna grasses that he knew so well.

This story is part of an ongoing series that will highlight trailblazers in birding, conservation, and environmental history whose contributions were overlooked or underrecognized because of their identities or backgrounds. We welcome readers to submit suggestions or pitches future profiles. Please email them to audubonmagazine@audubon.org, and put “History Series” in the subject line.

Millionaire trophy hunter, 68, is caught boasting how he helped to shoot 13,000 doves over four days on trip to Argentina
Daily Dose Of Cute: Mama Cat Takes Good Care Of Her Baby — Chickens? [VIDEO]
Arizona Passes Law that Partially Protects Some Rivers Left Behind from Federal Clean Water Act Rollbacks
To Raise Awareness, Some Colombian Birders Won’t Participate in Global Big Day
Kitten with So Much Sass Trills Her Way into Hearts of Family