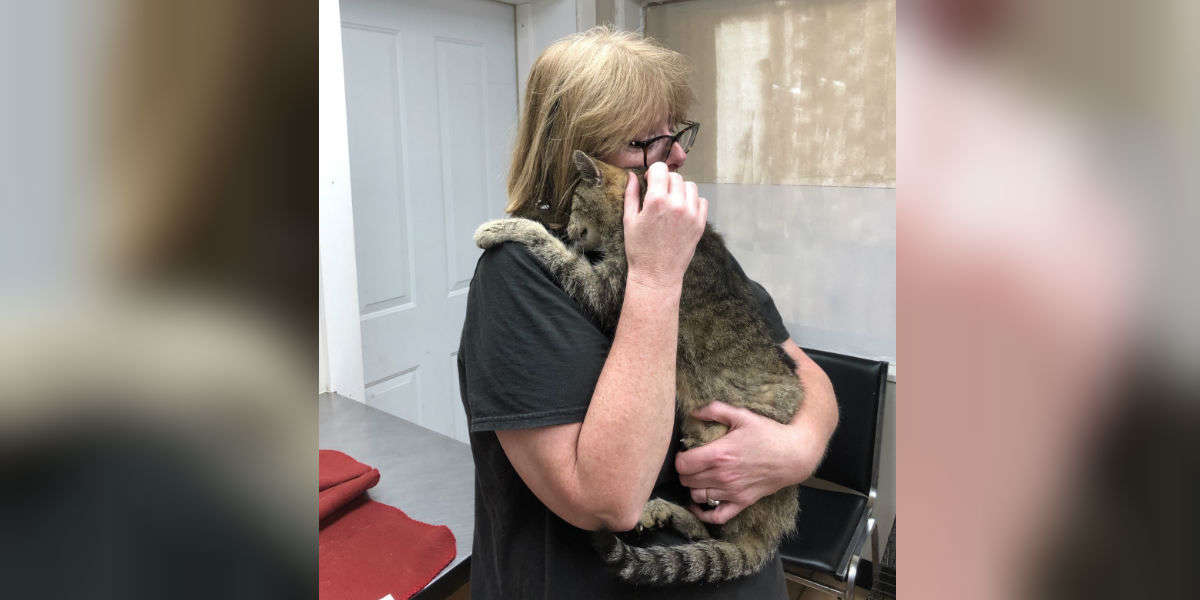 When Tiger first started showing up in Carol O’Connell’s yard about three years ago, he wouldn’t let her get anywhere near him. She could tell the senior cat was sweet, but he was scared.

“He would show up and then disappear for months at a time,” Lynne Meloccaro, executive director of the Dutchess County SPCA (DCSPCA) in New York, told The Dodo. “She fed him but couldn’t get close to him for a long time.”

O’Connell works at the DCSPCA and has seen her share of nervous animals, so she knew if she was patient and kind, Tiger might come around eventually. In the past three years, O’Connell and her son Dan have worked hard to gain Tiger’s trust, until the cat finally felt comfortable enough to approach them and even show them affection. From the way he acted, it seemed as if Tiger may have had a home at one point. On a whim, O’Connell brought a scanner home from work to see if he was chipped — and miraculously, he was.

Overjoyed, O’Connell told the shelter and they contacted the family listed on Tiger’s chip, John and Maggie Welz. When the shelter workers spoke with the Welzes, they couldn’t believe what they were hearing: Tiger had been missing for 11 years.

When he was only 3 years old, Tiger had been spooked by something on Halloween night and somehow escaped his house and disappeared. His family searched desperately and put up posters everywhere hoping someone would find him. When they sold their house, they asked the new owners to keep an eye out for him and continued their search from their new home, but eventually, they had to accept that Tiger wasn’t coming home.

“His family had given up on finding him, and we weren’t even sure they would want him again after all these years, but once they got over the shock that he was still alive, they didn’t hesitate — they wanted him back right away,” Meloccaro said.

When the Welzes got the call 11 years later that Tiger had finally been found, they couldn’t believe it, either. It was especially shocking how healthy Tiger was, considering how long he’d been on his own. He had an injured eye and a few skin issues, and was underweight, but otherwise, Tiger was totally fine.

“Some people have since come forward and said they had been feeding him for a while over the years,” Meloccaro said. “He survived because enough kind people in the community helped him, though apparently no one was able to capture him and bring him to us earlier. When he was finally caught by Carol and Dan, he didn’t resist and seemed happy to be touched and petted.  Maybe he had decided he’d lived on the streets long enough, and wanted to come inside again.”

As soon as she could, Maggie Welz rushed over to the shelter, eager to see her beloved Tiger again. No one had any idea if Tiger would remember his mom or not, as it had been so long since he’d last seen her.

When Welz walked into the room and saw Tiger, she immediately rushed over and scooped him into her arms …

… and it didn’t take long for Tiger to start cuddling her right back.

“Tiger just looked at her, sniffed her, and then rested his head on her shoulder,” Meloccaro said. “It was clear that he was not going to have any objection to having her be his human from now on.”

Tiger is now back home where he belongs and completely settled into life with his family again. It’s clear he missed them so much, and has taken to sleeping curled up with his mom every night. His family thought they would never see him again, but thanks to the kindness of their community he’s finally home, and they’re so overjoyed to have him back safe and sound.

If you’d like to help other animals in need, you can donate to the Dutchess County SPCA.