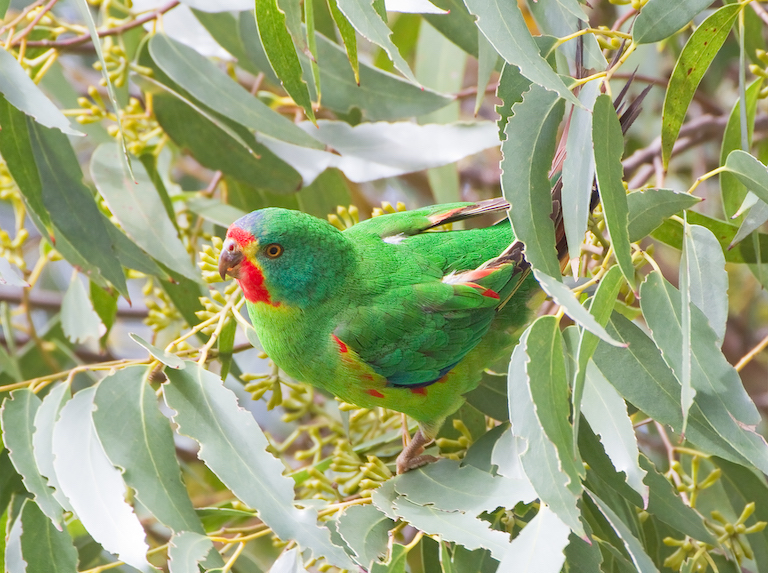 HOBART, Australia — A dividing line of marking tape separates a clearcut area from intact native forest in the Denison Range of Tasmania, Australia’s southernmost state. An hour’s drive from the state capital, Hobart, the forest sits just outside the boundary of the Tasmanian Wilderness World Heritage Area, Na UNESCO site.

The logged area is a scene of destruction, having been burnt after harvest. Sustainable Timber Tasmania (STT), a state-owned business enterprise responsible for Tasmania’s public production forests, does this, it says, to reduce fuel levels and create a nutrient rich seedbed for forest regeneration. Amongst a small patch of debris, there are the blackened stumps of six stringybark trees (Eucalyptus ovata). One of the trunks lies where it has been felled.

“This huge tree may have been five hundred years old,” says Bob Brown, former leader of the Australian Greens political party and founder of conservation organization Bob Brown Foundation (BBF). “It wasn’t even utilized by the logging industry. It was destroyed for nothing, burnt with a substance like napalm.”

Brown walks beyond the clear fell area into the dense vegetation that borders it. Arriving at a grove rich with temperate rainforest plants, such as sassafras (Atherosperma moschatum) and celerytop pine (Phyllocladus aspleniifolius), he lists off a number of the endangered species that rely on these forests for refuge, including the Tasmanian devil (Sarcophilus harrisii), and the Tasmanian wedge tailed eagle (Aquila audax fleayi). Then, as Brown reaches another stringybark tree that towers above the forest floor, he stops and points up. “Do you see those hollows up in the trunk? This forest is essential swift parrot habitat. And it’s earmarked to be logged at any time.”


The swift parrot (Lathamus discolor), the world’s fastest parrot, is also one of its most endangered. Each year, the species migrates from the east coast of Australia to the forests of southern Tasmania to nest, settling in the treetops and cavities of old-growth forest. Nectar-feeding and nomadic in nature, it was listed as critically endangered on the IUCN Red List in 2015, with recommendations that all public lands that support it be placed under permanent conservation management.

Six years on, the swift parrot’s continued decline has landed it in the center of a legal dispute over the preservation of native forests – a dispute that challenges the future of logging not just in Tasmania, but Australia itself.

Timber production has long been one of Australia’s key export industries, and is central to the Tasmanian economy. Known as Lutruwita to its Traditional Owners, the Palawa people, the island state is internationally renowned for its Gondwana-era vegetation. 59% of Tasmania’s native forests, approximately 1.79 million hectares, are protected in reserves. The remaining land, which includes 15% of the state’s old-growth forest pivotal to biodiversity habitat, is able to be harvested, a point which has been debated since the advent of the environmental movement last century.

To balance the competing concerns of conservation and industry, legislation known as Regional Forest Agreements (RFAs) were introduced in the 1990s. Under these RFAs, made between the Australian Commonwealth and four state governments – including Tasmania – native forest harvesting is allowed on certain public lands, provided protections for biodiversity are met.

Under the RFAs, forestry activities can be undertaken without the requirement of an environmental impact assessment for each individual activity. In essence, logging operations that fall under an RFA are exempt from the federal government’s key piece of environmental legislation, The Environment Protection and Biodiversity Conservation Act (EPBC).

This exemption is particularly contentious in Tasmania, where old-growth forests of ecological significance – such as the Tarkine, the largest single tract of rainforest in Australia – are currently being logged under the tenets of the RFAs.

Now, a challenge to the legislation has placed swift parrots in the spotlight and with it, the possible end of native forest logging in Australia. In December 2020, the BBF took the Commonwealth of Australia – together with the state of Tasmania and STT – to the Federal Court and argued that the that the state’s RFA is invalid and that certain forestry operations “have had, or will have, a significant impact on the Swift Parrot” and that such operations “have contravened, or will contravene” sections of the EPBC Act.

The BBF contended that although RFAs must be legally enforceable, not all parts of the legislation are, particularly those regarding wildlife protections; it also argued that there is no guaranteed protection of native creatures because the Tasmanian government has the ability to change legislation and policies at its discretion and without regard for federal legislation.

The BBF’s case was dismissed in February, with the Federal Court ruling that the Tasmanian RFA is legally valid. The BBF is now seeking special leave to appeal its case to the High Court.

Whether or not the appeal is granted, a precedent for biodiversity protections within the timber industry appears to have been set. The BBF’s case was sparked by a separate ruling in the Federal Court in June 2020, which found that VicForests, a state-owned forestry organization in the state of Victoria, had breached environment laws by harvesting ash forests that were habitat for the Leadbeater’s possum (Gymnobelideus leadbeateri), a critically endangered marsupial.

The future of the swift parrot is all the more pressing after scientists recently estimated there may be fewer than 300 of the birds left in the wild. In a study published in Animal Conservation in December 2020, researchers from the Australian National University (ANU) used DNA extracted from blood and feather samples to estimate the population size of the swift parrot for the first time. Co-author Dejan Stojanovic, a conservation biologist at ANU and a leading authority on the swift parrot, said that the study “shows that threats like the severe deforestation of the Tasmanian breeding habitat of swift parrots has drastically reduced their population size and increased the odds that the species will go extinct.”

George Olah, also a conservation biologist at ANU and lead author of the paper, told Mongabay that the researchers could not detect genetic differences between the nestlings hatched from nests in different years and locations, suggesting there is but a single population of swift parrots returning to nest in different locations in Tasmania each year.

A further threat to the species is increased predation by sugar gliders (Petaurus breviceps), an omnivorous marsupial. Indigenous to the Australian mainland, sugar gliders were recently found to have been introduced to Tasmania, and that their presence is particularly destructive to swift parrot nests. However, Olah believes that while sugar glider predation is a great threat to the swift parrot, loss of habitat is the most pressing concern facing the species.

“Losing their nests due to deforestation will definitely have a much stronger negative effect on their population,” Olah said. “There will be no point discussing sugar glider predation in nests if there won’t be any nests to start with.”

Suzette Weeding, STT’s General Manager of Conservation and Land Management, told Mongabay that the organization is committed to the protection of threatened species and recognizes that some swift parrot habitat coincides with some areas of “Permanent Timber Production Zone” (PTPZ) land, the public areas managed by STT.

The debate over the swift parrot comes as there are questions as to the current viability of native forest harvesting across Australia.

Recent figures from Tasmania’s Department of State Growth highlighted that almost 80% of all wood fiber products produced in Tasmania come from plantations, not from native forests. According to the most recent report by the Forest Practices Authority, the independent body that regulates Tasmania’s forestry operations, there is a legislative requirement that PTPZ land in the state must be made available for high-quality eucalypt sawlog operations. This figure has dropped markedly over the last decade, with the requirement of 300,00 cubic metres in 2012 more than halving to 137,000 in 2017 due to reductions imposed by the Tasmanian RFA.

Moreover, while forestry generated over 3,000 jobs for the Tasmanian workforce in 2018, 41% were in native forest harvesting. Similar figures in Victoria convinced its state government to initiate a transition to exclusively plantation timber by 2030.

Brown told Mongabay that all timber production in Australia should be transitioned to solely plantation forests, and that it was both a possible and viable enterprise. “We are not calling for an end to the timber industry, but rather an end to native logging. Plantation timber meets our wood needs. By transitioning we can save these miraculous tracts of Gondwana remnant forest that are worth more standing to Tasmanians than they are logged and burnt.”

When Mongabay asked STT whether a full transition to plantation timber was possible in Tasmania, Weeding said that the state was “fortunate to have a mature and well-regulated system for the management of wood production, administered by the Independent Forest Practices Authority.”

The High Court is the final court of appeal in Australia. Whatever the outcome, Brown is confident the days of native forest logging in Australia are numbered.

“People forget that the case we brought forth to protect Tasmania’s south west wilderness in the 1980s was thrown out by the High Court. Everyone told us it was over,” he said. “Eighteen months later, it was saved. All native forests will one day be conserved in Australia. It’s just a matter of when.”

This article by Nick Rodway was first published on Mongabay.com on 5 April 2021. Lead Image: Fewer than 300 swift parrots may remain in the wild today. Image by JJ Harrison via Wikimedia Commons (CC BY-SA 3.0).

Kitten with So Much Sass Trills Her Way into Hearts of Family
The Secret Footage of the N.R.A. Chief’s Botched Elephant Hunt
Cat Has Four Kittens with Rare Brown Coat and Kind Family to Help Them Thrive
Italy allows hunters to shoot 7.5m rare turtle doves: ‘This will accelerate decline until no birds are left’
Florida seeks solution to invasive reptile problem – Should Florida’s invasive reptiles be culled?