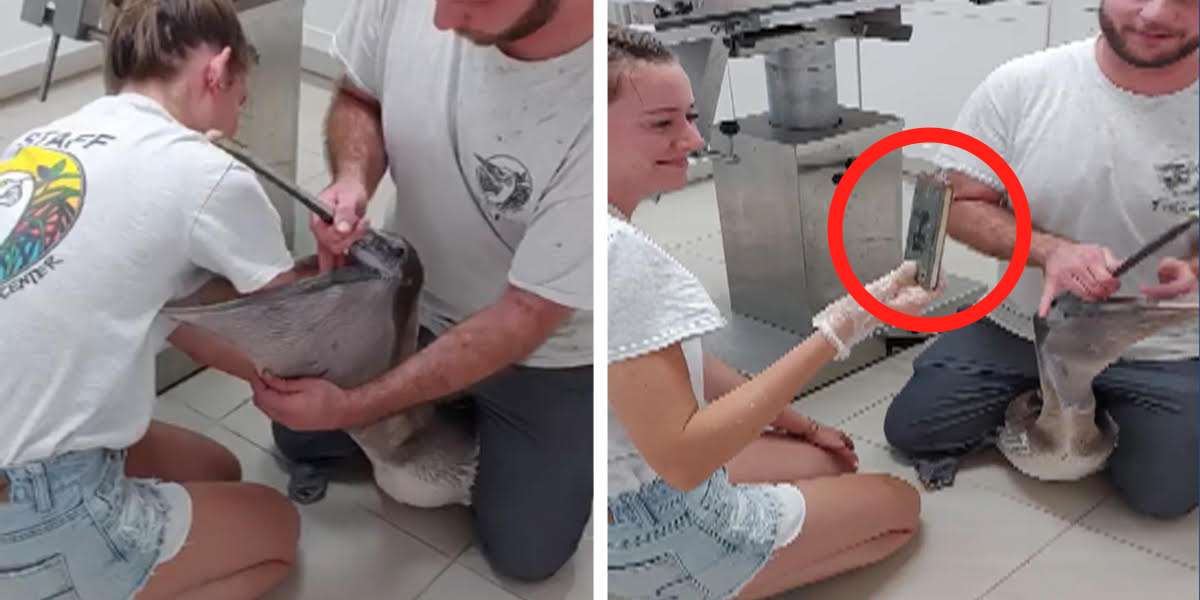 When hunger called, this pelican answered. But it was far from a typical meal.

He literally picked up a phone.

While hanging out at a marina in Florida last month, the pelican noticed a woman holding what he thought was a tasty fish free for the taking. Evidently, in what must have been a swift chomp, he grabbed it and gobbled it up.

Thing is, it wasn’t a fish. It was the woman’s cell phone.

When rescuers from the Florida Keys Wild Bird Rehabilitation Center heard about what had happened, they arrived to capture the pelican and bring him back to their facility.

As you’ll see, saving the pelican from that potentially fatal meal meant getting their hands dirty:

That icky procedure was all that was needed. The phone reportedly no longer worked after that, but its unwitting eater was back on his feet in no time.

“The pelican is well and was released,” Jordan Budnik, director of the rehab center, told The Dodo.

Rescuers hope that the public will be more mindful about not feeding wildlife, to avoid animals associating people with free food — likely the cause of this pelican’s mealtime snafu. But fortunately, things were (mostly) set right for both the bird and the cell phone’s owner.

In the end, though it was broken, she did get her phone back.

Kitten With Only 2 Legs Hops Her Way into the Perfect Home
Adorable Police Dog Learns To Sniff Out Hidden Toilet Paper
Big Fluffy Dog Insists On Being A Part Of Woman’s Home Workout Routine
Wild Animals Such as Chimpanzees and Honeybees Also Practice Social Distancing to Prevent the Spread of Disease
Petition: China Celebrates “Victory” Over Coronavirus with Markets Selling Bats and Wild Animals Again