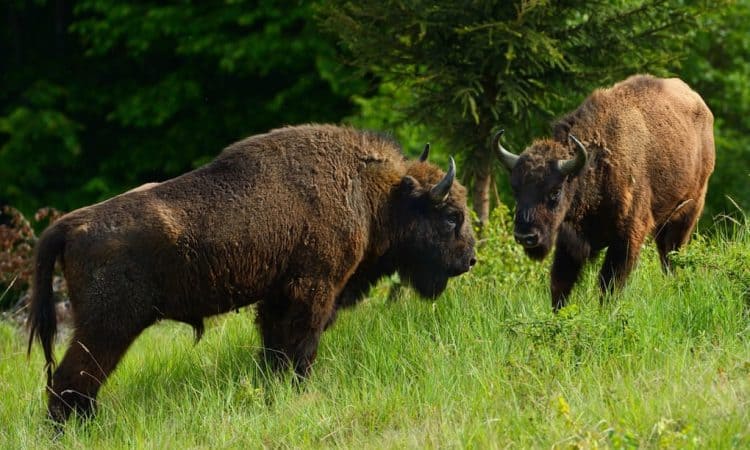 From this pile of logs onwards, we need to be completely silent,” says Georg Messerer, our guide through Romania’s southern Carpathians. His head cocks 45 degrees as a bird starts chirping. “Nuthatch,” he whispers, reaching for his binoculars. “And two red deer.” Georg directs our gaze to a row of apple trees, where sure enough, two deer are grazing.

Georg is an environmental encyclopedia. Give him a fresh footprint or dropping and he can tell you what the animal was and when it was there. Born in Germany, but with extensive guiding experience in Southern Africa, Georg has been guiding here, in the remote hills of Rusca in the Țarcu Mountains, near the villages of Armeniș, for more than five years – ever since the reintroduction of free-roaming bison to the area began.

The European bison (longer legged and slightly larger than their American cousins) became extinct in the wild in 1927 due to hunting and habitat loss – and had been absent in Romania for nearly 200 years.

A keystone species, vital for creating a mosaic of habitats by grazing on fast-growing dominant tree species, their movement opens up undergrowth and creates fertile soil – and they distribute seeds on their fur and in faeces.

They are “landscape architects”; nature’s chainsaw – which is why WWF Romania and Rewilding Europe have been working hard to bring them back. It’s part of on-going efforts to restore nature and wild ecosystems and in doing so help fight the impact of the climate crisis.

Since the initial release of 17 bison onto Magura Zimbrilor (Bison Hillock) near Armeniș in 2014, the number has grown to 100 (with newborns and new arrivals from elsewhere) – providing excellent ecotourism and tracking opportunities.

The project is one part of a remarkable conservation success story, supported by the European Union’s LIFE programme. Now there are about 7,000 bison across the continent, up from 2,500 just 10 years ago.

I’m on a trip to track bison, spending three days hiking through forests and mountains, staying in cabins, renovated farmhouses and safari tents. The focus is on slow, mindful movement rather than clocking up miles – though we’re on our feet for six hours a day or more.

The southern Carpathians are also home to large carnivores like brown bears, wild boar and wolves, as well as chamois, lynx, golden jackals and wildcats. It is a place that still feels wild. As we walk, the smell of mint rises through the warm air, and densely forested mountains layer into the distance. A rare ural owl perches on an ash tree nearby, long-tailed tits flit around and join blackbirds, robins and finches in song, falling silent only when a sparrowhawk – a killer of small birds – glides overhead.

We stop just before reaching a wetland and Georg turns to us with widened eyes. “Bison,” he mouths. Binoculars out, we watch two huge, muscular animals grazing while a third bison goes 12 rounds with a tree (they can weigh up to 1,000kg). They soon realise they’re being watched, and we see a full herd stampede up a steep hill nearby, leaving the ground shaking in the process.

Camera traps have shown bison co-existing happily enough with wild boar and bears. More surprising to local conservationists were the birds that started using bison fur as insulation for their nests, and how water-filled bison footprints have become highways for small toads.

We reach our campsite in time for lunch – balmaş, a traditional meal made with cheese from a nearby farm, melted in a cauldron with oil, water and cornflour – cooked by Bibi, a local hunter. Matei Miculescu, a WWF bison ranger, joins us. His work has been imperative in helping the project develop within the community. Armeniș was ideal for bison because of the vast mixture of grasslands and forest, but the bison were accepted because the mayor at the time, Petru Vela, believed they would also bring jobs, he tells us.

“From the beginning we saw the need to work with and invest in locals,” says Miculescu. “We started from scratch with tourism here. Before the bison, we didn’t have even one accommodation option. We helped one family to renovate a guesthouse. Now in the summer season it’s almost fully booked out. That’s a good income that they didn’t have before.”

Locals are hired to cook and transport people from villages to camps and airports. You can buy local schnapps, and a souvenir shop is in the works. WWF works closely with hunters, to prevent poaching and show the income wildlife can bring. A local organisation, WeWilder, has also been set up as a social enterprise arm of WWF to work with the community and compensate anyone who loses crops to bison, which may stray into the village looking for food in their first year, while still not fully wild.

“They can damage an orchard or eat haystacks,” says Matei. “Unfortunately, the government system which should pay for the damages is not properly in place, so it’s difficult to get the money back.”

Still, the bison have been overwhelmingly well received. “It’s important because in the long term, it will be the locals who have to take care of the bison and the habitat,” says Matei. “The idea isn’t just to focus on the bison, it’s to develop small businesses so that families can benefit.”

After an evening walk and a comfy night in safari tents we move on the next day to Sat Bătrân, a village near Armeniș, to meet Oana Mondoc of WeWilder, who has overseen the production of the tourist infrastructure in the area. We visit MuMa, the tiny house built by WeWilder in lockdown, nominated for a EUmise architecture award for helping a “local community take steps towards sustainable relationships with nature and new pathways to prosper from its wilderness.” The 15 square metre one room-space, on raised wooden legs with huge window overlooking the orchard it’s in, is completely sustainable – even the oil used to cook our food is recycled into candles.

“If you have a blank slate, you have to be really careful with the way you set things up,” Mondoc says. “We’re trying to set an example in terms of no impact architecture.”

While two of our group will spend the night there, the rest of us stay in a luxurious, stone farmhouse close by, with natural soaps and even plant-based toothpaste provided.

That afternoon we all meet up to explore a chamois trail with Petru, a local tracker who has built wildlife hides in the forests. We learn to tell bison tracks from cattle, and go on a night walk beneath star-speckled skies, spotting wildcats and foxes. On our last day we wander again meeting local shepherds whose sheep dogs protect their livestock from wolves, and pick plums as we climb to a wildlife observatory looking out over the Bison Hillock, with 2,192-metre Vârful Țarcu behind us.

Somewhere in the vast hills below, bison are grazing, and the ecosystem around them thrives.

This article by Stuart Kenny was first published by The Guardian on 4 November 2021. Lead Image: There are now about 100 bison providing ecotourism and tracking opportunities in Romania’s south-west Carpathians. Photograph: Staffan Widstrand/Rewilding Europe.