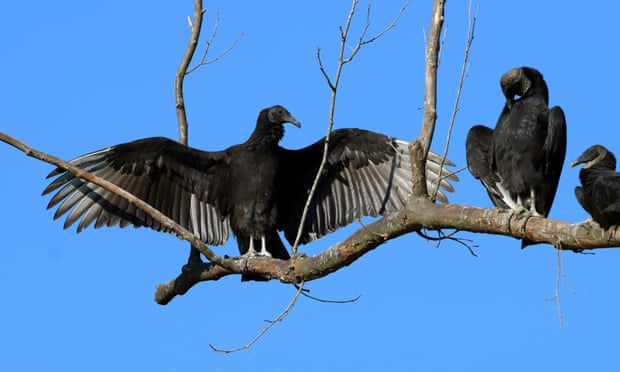 Residents of a North Carolina town have spoken of their dismay after spending more than a year besieged by scores of buzzards.

The birds, which arrived in Bunn in late 2020, quickly staked out their territory in the 344-person town.

Standing at 2ft tall, clad in dark brown feathers, and described as “graceful in flight” yet “awkward on the ground”, the buzzards have also proven to be remarkably self-possessed, and have resisted all attempts at dispersal.

Over the past 12 months a high school and a cell tower have become the birds’ regular haunts, along with the home of one unfortunate local resident, Ally Leggett.

“This weekend, they were up there swarming,” Leggett told the News and Observer newspaper, referring to the roof of her house. “It makes my dogs insane.”

Leggett has counted up to 58 of the buzzards on her property. She said the birds have slowly destroyed her chimney, while according to the News and Observer, they also “scattered droppings like liquid business cards”.

In American English buzzard is often used as a catch-all term for vultures, and Bunn’s nuisance birds are either turkey vultures or black vultures, both of them protected species.

Attempts to remove the birds, which as well as gathering on Leggett’s roof have also been spotted in groups of 20 or more at Bunn high school, have so far proved unsuccessful.

“I go by and blow my horn at them,” the local police chief, Steve Massey, told the News and Observer, a tactic which has proved futile. The newspaper reported that in December 2020 the high school took the unusual step of blasting a cannon from its roof in an attempt to scare away the birds.

“That worked for a while,” Massey said. “It seems they’re back.”

Efforts to disperse the buzzards have been complicated by the birds’ tendency to vomit when roused.

“Vomiting allows them to take flight much faster,” Kathy Schlosser, a local naturalist, wrote of turkey vultures in 2018.

“Some people report this as intentional, projectile vomiting at approaching people or other creatures, but it is a means of escape, the distraction and lessened stomach weight allowing them to get away quickly.”

The birds predominantly scavenge in roadsides or in fields, according to the North Carolina Wildlife resources commission, and according to Schlosser they are quite gluttonous, consuming up to 20% of their body weight during a single sitting.

As well as destroying Leggett’s chimney, the buzzards have also reportedly damaged the roof of a Chinese restaurant, and more generally have proved to be an eerie presence as they watch over Bunn residents.

A further nuisance is the toxicity of the birds’ feces.

“Because of the quality and quantity of food their digestive systems handle, strong stomach acids are necessary,” Schlosser wrote.

The acidity of their expulsions, she said, can strip the paint from a car – and presumably anything else covered in paint – in no time.

This article by Adam Gabbatt was first published by The Guardian on 26 October 2021. Lead Image: Black vultures in North Carolina. Bunn’s troublesome ‘buzzards’ are either black or turkey vultures. Photograph: Bob Karp/Zuma Wire/Rex/Shutterstock.

Jaguars in Mexico are growing in number, a promising sign that national conservation strategies are working
A Woman Allegedly Breastfeeding Her Cat On A Delta Flight To Atlanta Is Going Viral
Kitten Turns into Happy Affectionate Shoulder Cat After Family Helps Him See Through Both Eyes
Truffle-eating marsupial on ‘brink of extinction’
Utah Rescue Group & Humane Society Pilot New Program To Sponsor Feral & Stray Cats