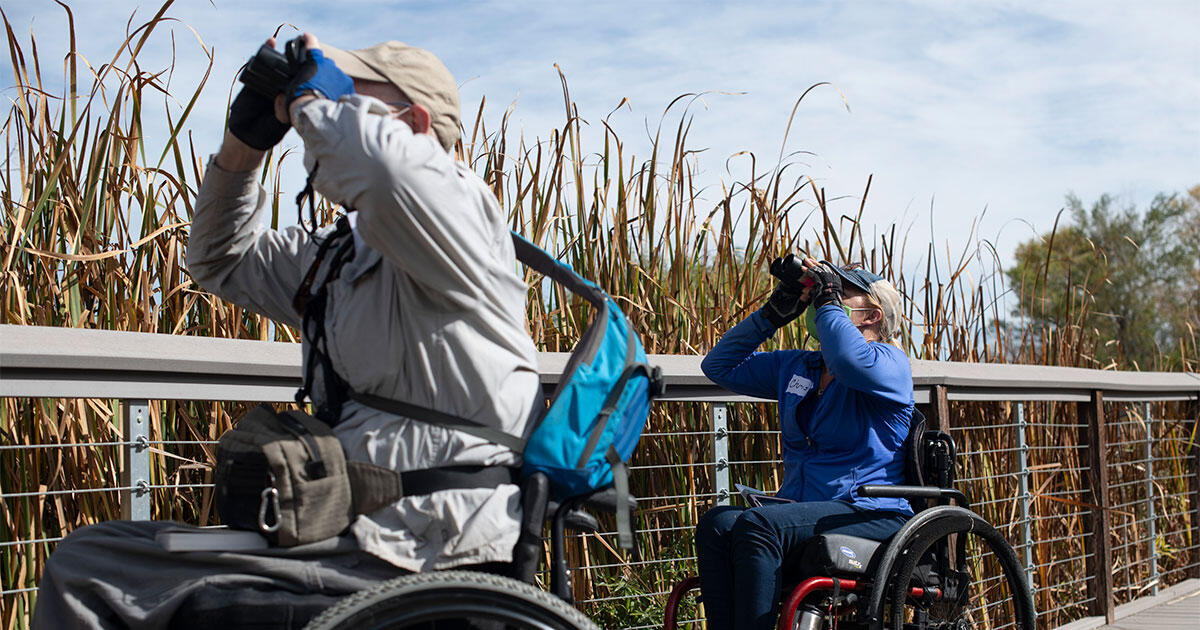 “I’m seeing a female merganser, and she looks like she’s having a bad hair day,” says Bob Roark pointing to Tabor Lake in Denver’s Prospect Park. The other attendees on this mid-October birding trip aim their binoculars in search of the “hoodie,” known for her spikey cinnamon crest. The temperature is cooler than expected, and when a woman with a walker mentions her hands are cold, Roark gives her his insulated gloves—which he’d brought to wear under the fingerless cycling gloves he wears to propel his wheelchair. This outing is part of a new initiative that Roark created to get mobility-impaired people out in nature and birding.

When Roark was 29, he fell during an ice-climbing lesson, suffered a spinal cord injury, and lost function of his legs. Today he describes himself as a “40-year-long wheelchair jockey and a geezer.” Birding helps the retired physician’s assistant keep active and outdoors, but it hasn’t been an easy hobby to pursue. He tried several groups in Denver, Colorado, but none could accommodate his needs. Many birders go off the beaten path, where Roark can’t go. And even outings in urban parks proved challenging; he frequently encountered a lack of accessible parking, terrain his wheels couldn’t navigate, and paths with hills that are too steep for him to manage. “It was a very frustrating thing,” he says.

Frustrated but not discouraged, he decided to tackle the problem head-on. Roark worked with Denver Audubon, an independent chapter of the National Audubon Society, to found Birding Without Barriers, a program designed to make birding more accessible to others in Denver who have mobility challenges. They consulted longtime birders to identify potential parks, and then Roark pushed himself over every candidate trail, checking exertion levels, measuring path slopes, and identifying obstacles like narrow gates that wouldn’t accommodate chairs. So far, the approach has pinpointed three parks in the Denver metro area that are wheelchair friendly enough for serious birding. The program’s first outing took place this past March, before the pandemic shut everything down. On this second outing, the nine attendees are socially distanced and wearing masks.

The Denver program is part of a growing national movement. It all began a couple of years ago when Virginia Rose launched the Birdability initiative to make it easier for people with mobility differences to get out and bird in Austin, Texas. Rose, who also uses a wheelchair, wants to connect people like Roark into a network of “Birdability captains” across the United States to share accessibility information about parks in their areas. Since 2018, the initiative has expanded to 12 states and 18 captains, including Roark, and spawned Birdability week, which runs October 19-25 this year.

Rose developed the checklist that Roark used to evaluate trails in Denver, and she also worked with Elizabeth Todd, then a Dangermond fellow on the GIS team at Audubon, on an online mapping tool where people drop pins at parks they visit and post reviews of their accessibility experiences. Within a week of launching the site, 100 pins had been dropped all over the country. Rose can’t believe how quickly it took off. “The whole thing is amazing,” she says.

The benefit of such a mapping tool becomes obvious when the Prospect Park birders encounter a long boardwalk that winds its way through a wetland. After traveling down the platform, they are immersed in nature. For a moment, nobody speaks. On both sides of the railing, long cattail fronds block all hints of the urban surroundings. A Red-winged Blackbird’s characteristic trill breaks the silence, and the group’s heads swivel in search of the bird. Some laugh and others talk about how much they love that sound.

Roark says isolated places like this—that also have access—are tough to find, but they’re critical to him and others with mobility challenges. Why? “The need to get outside. Nature,” he says. “You don’t have to give up the passions in your life just because you have trouble getting around.”

Roark’s passion for birds ignited decades ago in Eastern Africa. After three months of rehabilitation following his injury, he finished his physician’s assistant licensure and married his girlfriend. In 1981, the newlyweds moved to Sudan to help care for Ethiopian and Eritrean refugees fleeing from war and famine. Roark provided medical care while his wife, Gruffie Clough, started feeding programs in the refugee camps.

A few years later, when the couple moved to Matoso, Kenya, to establish a healthcare facility to treat impoverished communities, Roark discovered birding. The hut they lived in bordered Lake Victoria, and from their backyard, he became enamored with birds such as Crowned Cranes and Saddle-billed Storks.

Today Roark’s search for birds temporarily stalls when he tries to cross a bridge and his chair catches on uneven asphalt.

“Bob, you need a boost?” his wife calls out.

Though the park is accessible, there are always “extra things” that walking people wouldn’t think twice about, say Clough. It takes two attempts for others to push Roark over the bump, and the force required nearly launches him out of his chair. Other “extra things” included a grooved ramp that caught front caster wheels, a boardwalk platform with a huge step but no warning sign, and no nearby accessible restrooms.

“It really makes you realize how much we take our mobility for granted,” says Karl Brummert, executive director of Denver Audubon, who has no mobility challenges. Roark asked Brummert to lend his expertise for the trip; despite identifying several birds by sound, Roark isn’t yet comfortable with his birding acumen. Brummert was touched by the group’s enthusiasm and is excited about Birding Without Barriers. “It’s getting different people involved with birding,” he says.

Birding Without Barriers is about social justice, says Kathy Reiner, a nurse who received a fellowship from the Alliance of Nurses for Healthy Environments to help Roark assess the safety and accessibility of trails and to speak to the program’s health benefits. “People have been rediscovering nature and green spaces for their mental health during this pandemic,” she says, adding that outdoor activity promotes mental well-being and helps form needed social connections. “But people with mobility disabilities definitely have a harder time accessing nature.”

Chris Layne, the current Ms. Colorado Wheelchair, had never birded before today. “I’ve been wanting to get out after months of solitude,” she says. She heard about the outing from a friend and came to get outside and socialize. Layne has been in a wheelchair for four years after falling 80 feet in a hiking accident. The paralysis ended her 25-year nursing career, but her motto is to “get up, get out, and get rolling.”

Layne also brought her aging mother, Ramona Shively, who has mobility challenges of her own (Shively is the woman with the walker wearing Roark’s gloves). “Whatever she needs I need, whatever I need, she needs,” Layne says. Until her accident, Layne hadn’t appreciated how many people, especially senior citizens, require help getting around.

Layne pauses to appreciate a Black-capped Chickadee announcing itself with its familiar chickadee-dee-dee. “This is just what I needed,” she says. It’s impossible to see through her lime-green facemask, but her eyes reveal an ear-to-ear grin.

44 Perfect Gifts for the Bird and Nature Lovers in Your Life
Kitten Found in Backyard with His Siblings, Grew Unique Coat, Determined to Thrive
‘Everyone is outraged and sad’: Canada shocked by killing of rare white moose
How the Evening Grosbeak Got Its Misleading Name
Cat Showed Up at Family’s Door and Asked to Be Let Inside After Spending Years on the Streets