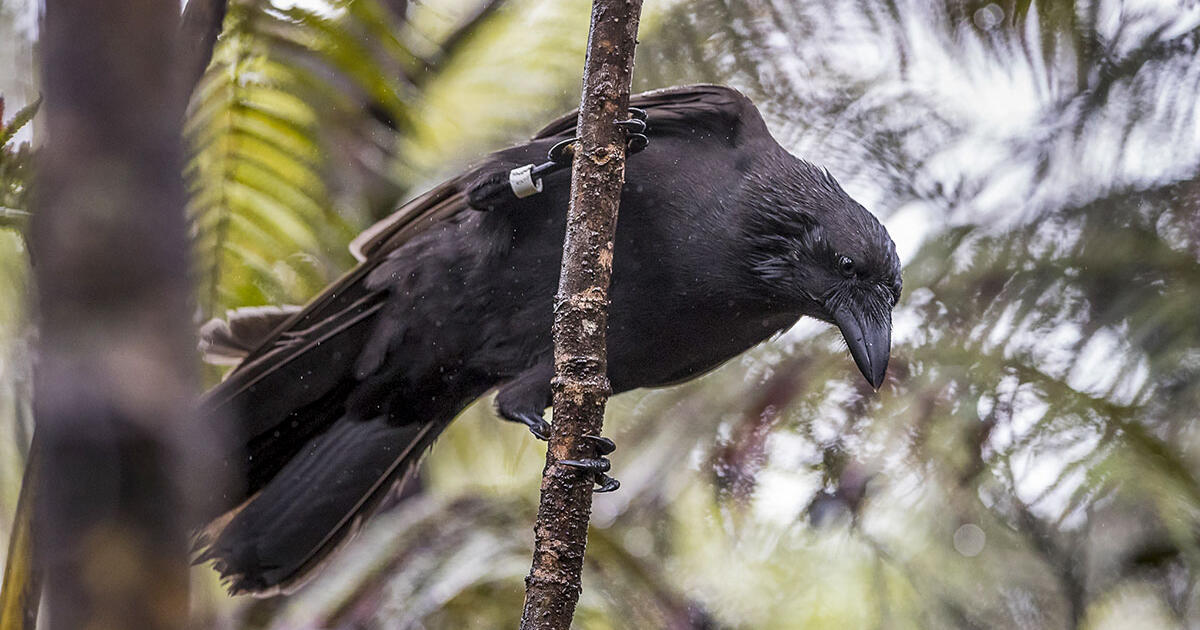 During his years in the wild, the Hawaiian crow that researchers named Kia‘ikūmokuhāli‘i was able to live up to his name: a “guardian of the forest.” Along with other ʻAlalā (as the crows are called in native Hawaiian), he had been reintroduced to the wild in Puʻu Makaʻala Natural Area Reserve on Hawaii’s Big Island after being raised in captivity by the ʻAlalā Project, a partnership between federal and Hawaiian state conservation agencies and the San Diego Zoo Global.

But earlier this month, scientists brought Kia‘ikūmokuhāli‘i and four other remaining birds back to the conservation center where they were raised. They were the last survivors of the first cohort of ‘Alalā reintroduced to the forests in 2016, after the species had been declared extinct in the wild in 2002. Out of 30 birds in that group, only these five had survived.

Now, the wet forests of the nature preserve will no longer ring with the squeals, rattles, growls, and wails of free-living ʻAlalā; the corvids are, once again, extinct in the wild.

Researchers decided to bring Kia‘ikūmokuhāli‘i and the other birds back to captivity after a number of fatalities. Some of those deaths were caused by predation, mostly by another native bird: the ʻIo, or the Hawaiian Hawk. Other ‘Alalā perished in winter storms or simply went missing and were never recovered.

The recovery of any critically endangered species isn’t easy and takes time. Sometimes, it can take decades. One of the most successful recovery stories in Hawaii’s conservation history took place with another endemic Hawaiian bird: the Nēnē, a Hawaiian goose. The Nēnē was federally protected under the Endangered Species Act in 1967 and only down-listed to threatened this year. Researchers released group after group of captive-bred Nēnē in the intervening decades until a self-sustaining population was finally realized.

The Alalā will likely have a similarly long battle ahead. Indeed, back in 2016, a handful of the released birds were brought back to the center. An overcast afternoon had set the stage for a rough introduction to the forest, and three birds had died within a week. The researchers recaptured the surviving birds that had been set free on the same afternoon to be safe—including Kia‘ikūmokuhāli‘i, who was later released again under more favorable conditions.

In the days before this year’s recent recapture, researchers could hear Kia‘ikūmokuhāli‘i making alarm calls as an ʻIo was seen circling the area. But he stood his ground quite well.

“We call him the ʻchampion bird,’” Guadioso-Levita says, citing his survival skills. “He can be aggressive and has been seen mobbing ‘Io.”

The ʻAlalā is only one of two corvid species worldwide that is a “tool user,” long considered to be a signifier of animal intelligence.

The ʻAlalā is only one of two corvid species worldwide that is a “tool user,” long considered to be a signifier of animal intelligence. Even for an ʻAlalā, researchers seem to think Kia‘ikūmokuhāli‘i is especially intelligent. Back in 2016, when they released the first captive-bred ‘Alalās, Kia‘ikūmokuhāli‘i  was the first to exit a temporary aviary and fly into the wild. Last year, he paired up with a female, and the two worked at placing sticks in a fork of a tree, exhibiting pre-nesting behavior.

After researchers decided to recapture the birds this year, “we tried to catch him for a month, and he outsmarted us every time,” Guadioso-Levita admits.

Crucially, for birds raised in captivity, each one of the five recaptured birds (three that are female and two that are male, including Kia‘ikūmokuhāli‘i) exhibited a variety of anti-predator response tactics during their time in the wild. Gaudioso-Levita hopes to preserve and cultivate those survival skills among the population, even in captivity.

“These five birds can serve as really valuable mentors,” she says. “We want to make sure that their skills and wild culture can be passed on to future release birds.”

Given the close calls and the new predation threat from the Hawaiian hawks, the ʻAlalā Project has paused the next scheduled release of captive-bred ʻAlalā, which they had originally planned for 2022. Gaudioso-Levita makes it very clear, however, that the team is not giving up on one day having a self-sustaining wild population of ʻAlalā. They just have some regrouping to do.

One critical area of study will be the predatation by the ‘Io. Gaudioso-Levita wants to learn more about the hawk’s population, distribution, territorial size, and daily movements before releasing a new group of captive ʻAlalā.

The researchers are also considering new release strategies next time. One option is to release adult pairs or family groups that formed in captivity. Another is to try a different island for the next release; corvid fossils have been found on four of the main Hawaiian Islands, and no ʻIo currently live on any island except the Big Island. That option, however, would involve different community and stakeholder commitments, and to conduct any necessary habitat restoration. Plus, the ʻAlalā themselves seem to like spaces they know: Records from the 1990s indicate that their median home range is a mere 1,186 acres.

‘Alalā are culturally significant birds in Hawaii, and there are many stories and sayings about them. One such Hawaiian saying goes, “He ʻAlalā, he leo manu nui.” It translates to, “The ʻAlalā, the bird with the big voice.”

With time and luck, Kia‘ikūmokuhāli‘i will soon be back on the slope of Hawaii’s Mauna Loa, raising a ruckus.

Banff wolves have lower survival rate due to hunting, trapping outside park boundary
8 Crazy Hanukkah Dog Sweaters For 8 Crazy Nights
Cat Goes To Beach For The First Time And Has Very Strong Opinions About It
Stray Cat Found Kind Family to Take Her in So Her Kittens Could Have Better Lives
The Cutest Christmas Sweaters For Your Pet