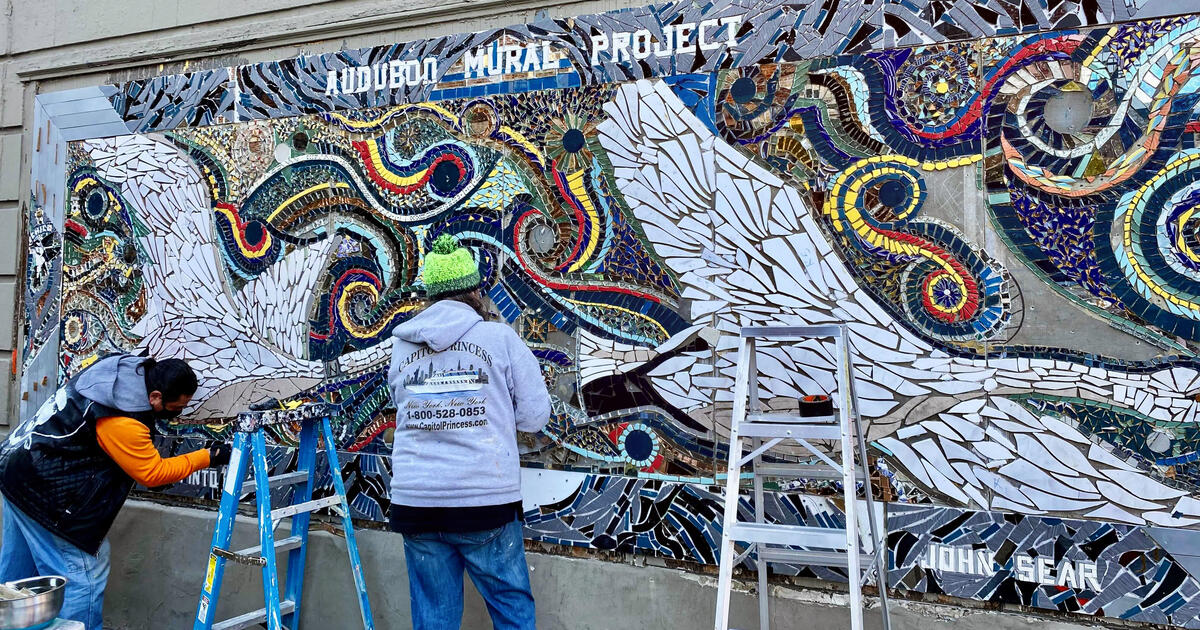 On a cold and crisp December morning in New York City, tens of thousands of pieces of broken ceramic, glass, and mirror glinted under the sun that fell on the corner of West 163rd Street and Broadway. Guatemalan artist Juan Carlos Pinto and Brooklyn-native John Labriola methodically glued each into the giant mosaic taking shape on the wall. Passers-by stopped to watch, and then contribute, as the artists invited them to help. After about 40 hours of work on site and many dozens of spontaneous volunteers, the final tile was placed into the 20- by 7-foot frame—and two Trumpeter Swans appeared to fly out of it.

The residents of Washington Heights have grown accustomed to seeing birds pop up on walls around their neighborhood, thanks to a public-art initiative of the National Audubon Society and Gitler &_____ Gallery. The Audubon Mural Project has for the past six years enlisted artists to paint avian species threatened by climate change throughout Northern Manhattan, where the famed 19th century bird painter John James Audubon himself once lived. But the 90th mural, funded by the Jacques and Natasha Gelman Foundation, stands apart on a few counts. Not only is it the first mosaic, and the first mural made of recycled materials, but the week-long installation also served as a bright spot at a time when the pandemic has enforced greater isolation.

“People now can walk by that and say, you know, I helped do that,” says Elizabeth Lorris, the chair of the parks and cultural affairs committee of the neighborhood’s community board. “I am incredibly proud that I myself laid about six tiles and then grouted them.”

It’s this collaborative approach to art that first brought Pinto and Labriola together when they met six years ago. Labriola, who got his start as a teenaged graffiti artist, remembers his shock at walking into Pinto’s Brooklyn apartment on a community art walk and seeing him openly discuss his mosaics. “I’m very guarded at times,” Labriola says, “and this guy is sharing all this magic with anybody.” Whereas graffiti tends to be private—made in secret, when no one notices—Pinto talked about his work with friends and strangers alike. “I was so impressed with that,” Labriola says. “The sharing was not from my world.”

They immediately hit it off. Labriola’s construction background meant that he knew how to work with the materials that Pinto had been using since the late nineties, when he left Guatemala and traveled to Cuba, Barcelona, Vienna, and finally, New York, to learn about mosaic art. Pinto realized that the act of creation for mosaic artists is often shared—massive art pieces can decorate entire cities, as Antoni Gaudí did in Barcelona, so the smashing of glass and platters and bottles and mirrors often involves several people. “There are not too big egos in mosaic art; there’s a community mentality to it,” Pinto says.

That mentality also translates into how the material arrives at the pair’s studio; all of it is either recycled or donated. Recognizing the potential for beauty within someone else’s old memories or trash is a vital part of the duo’s work, explains Pinto. “It’s this idea of grabbing that bad juju and bringing it back in a different form.” In 2018, when asked to be part of the Audubon Mural Project, they decided to take what they felt was the “bad juju” of the recent presidential election and turn it into something beautiful. “There is nothing more simple to start a conversation about migration, about diversity, about freedom than birds,” Pinto says.

After reviewing the long list of birds threatened by climate change, they chose to depict a pair of Trumpeter Swans flying freely. Partly because “they don’t need a freaking visa to come to this country,” as Pinto puts it, but also because they had a massive mountain of white tiles in their studio. “The material just spoke to us,” Labriola says.

The choice resonated for another reason. Like the salvaged material given new life in mosaics, Trumpeter Swans, after being hunted to near extinction, have made a spectacular comeback in recent decades. In the Canadian Rocky Mountains, the population grew from 75 birds in 1968 to 10,957 in 2015. In the United States, it skyrocketed from 2,575 animals to 62,866 over the same period, according to the latest range-wide Trumpeter Swan Survey Report.

Yet the hard-won victory—the fruit of a partnership between federal and local authorities, nonprofits, and state parks—is seriously threatened by climate change. The species is projected to lose 83 percent of its current summer range with 3 degrees of warming (which the world is on pace to reach by 2080), according to the models underpinning Audubon’s “Survival By Degrees” report. The birds may also gain potential habitat as the Arctic warms—but that doesn’t mean they will be able to thrive there. It may take several generations of swans to learn to adapt to new breeding areas, says Gary Ivey of the Trumpeter Swan Society. And even if the species’ preferred wetland habitat develops farther north, it will likely provide them with less food (because tundra soil is more acidic), or overlap with the home of other birds, like Tundra Swans, forcing both species to compete for their survival.

Pinto and Labriola designed and prepped the mosaic at their Brooklyn studio, and then had to wait a year for unexpected scaffolding at the mural’s site to come down. Finally, it did—and the pandemic struck. Though that added further delay, the artists thought the uplifting image of birds might be especially welcome during the public-health crisis and so laid the groundwork for its installation.

First, they had to prepare the site by scraping peeling gray paint from the wall. It revealed layers of color, reflecting years of past graffiti art by a local artist named Totem. Soon, Totem himself showed up, and an initial protectiveness over his old spot soon grew into a collaboration, too. Pinto had recently lost a nephew, and Totem had lost a son, so Pinto added side panels to the mural with hummingbirds to honor the memory of the two young men. “When you recycle, you’re already working with a dead object, and you have the almost superhuman capacity to give life back,” Pinto says. “It’s like a resurrection.”

Lorris believes the art piece has the potential to heal beyond the personal mourning of both artists. In a community heavily impacted by COVID-19—four of the five COVID hotspots in New York City are in northern Manhattan—the suffering is still ever-present. “When everybody is walking around broken, depressed, and there’s something beautiful and inspiring, that’s nourishing,” Lorris says. “Art is food for the soul. Art connects you to the natural world and the people around you. It feeds and nourishes you in a way that without it, we’d be hungry in the worst possible way.”