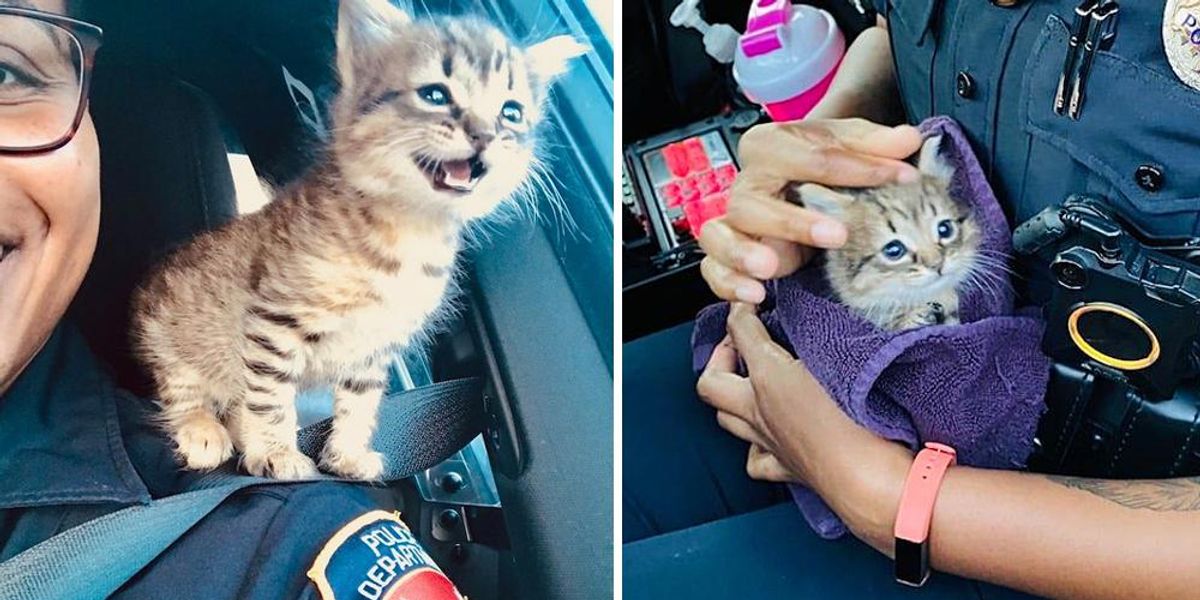 A stray kitten snuck his way into a police officer’s heart and insisted on being her cutest shoulder cat.

Last Wednesday (March 24th), two police officers from the Durham Police Department in North Carolina were out on patrol just like any other day, but little did they know that a tiny stray kitten would soon change the course of one of their lives.

Officers J.N. Rowsey and E.L. Masnik were near Dawkins Street and Linwood Avenue when a tiny ball of fur caught their eyes. Upon closer inspection, they saw a scared little kitten all alone in the street, without a mother in sight.

Hoping to find the kitten’s family, the officers began to ask around the neighborhood while they searched for a mother cat and other kittens. After much effort, no one came forward to claim the tabby, and it became clear that the kitten was by himself and had no home to go to.

“The officers searched the neighborhood in an attempt to find the kitten’s owner or (his) mother but had no luck,” Durham Police Department wrote on Facebook.

They couldn’t leave the kitten out to fend for himself, so Rowsey brought him back to her squad car and wrapped him in a towel to soothe him. The frightened little tabby was able to calm down while being held by the officer. With a lot of pets, cuddles and reassurance, the little guy came out of his shell.

The pint-sized kitten quickly made himself comfortable after a cuddle session with his rescuer. He climbed onto her shoulders and decided that was the spot to stay.

He roared with his adorable little meows while he stood tall on Rowsey’s shoulder, as if he was ready to leave the street life behind.

The kitten quickly crawled his way into the officer’s heart. Rowsey fell head over heels for the sweet tabby and decided to adopt him. She took the kitten to the vet, got him a clean bill of health, and lovingly named him Dobby.

Dobby who was estimated to be around six weeks old, began his new chapter with the person who saved his life. According to Rowsey’s family, this is her second rescue kitty.

What seemed to be a routine patrol, turned out to be quite the adventure. Not only did Officer Rowsey save a precious life, but also she added a new member to her family.

The kitten will never have to spend another day wandering the streets for food and shelter. Dobby the tabby now has a place of his very own and a forever human that adores him to bits.