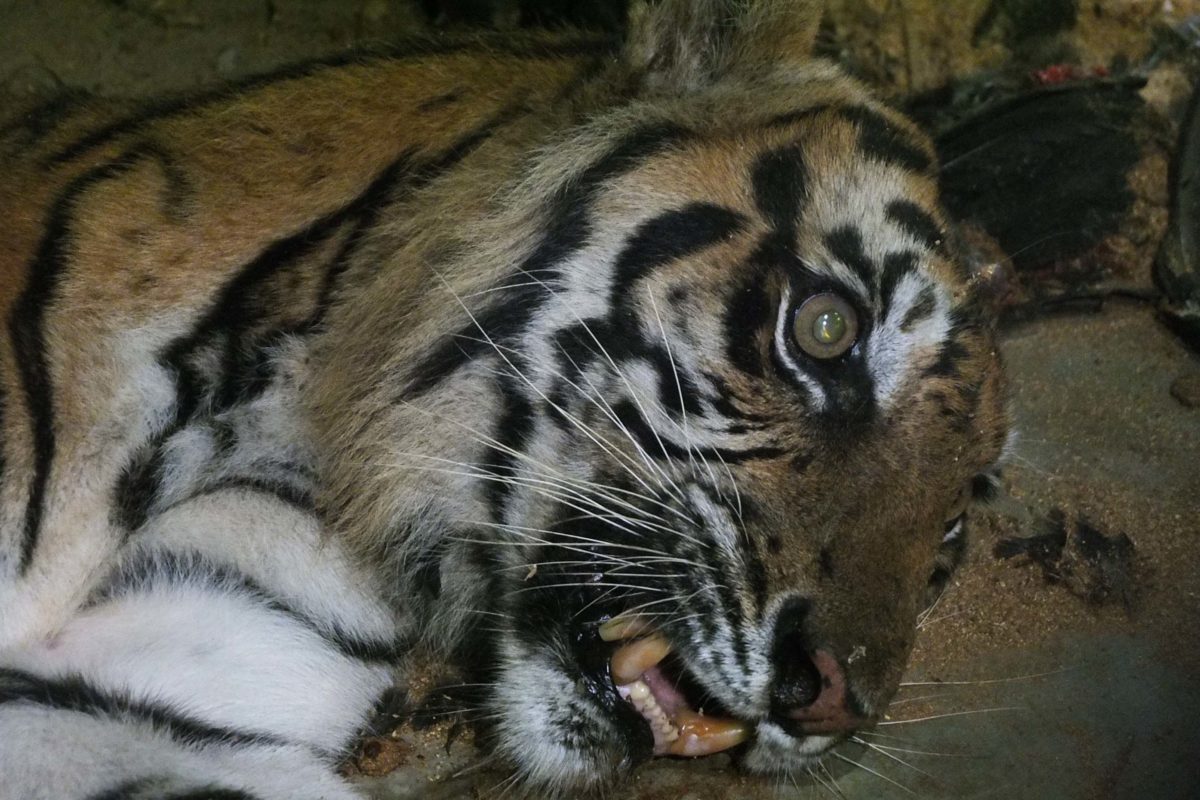 JAMBI, Indonesia — Conservation authorities in Indonesia have reported the death of a Sumatran tiger captured in October following reports of deadly attacks on people.

Officials have linked the death to a suspected local outbreak of African swine fever killing the big cat’s main prey.

The adult female Sumatran tiger (Panthera tigris sumatrae) died on Nov. 2 at a wildlife rehabilitation center run by the conservation department of Jambi province on the island of Sumatra, less than three weeks after her capture by conservation authorities near Kerinci Seblat National Park.

Preliminary findings from a necropsy carried out on the tiger show that the animal had been “chronically malnourished” despite medical intervention by experts at the center.

It also found worm eggs in the tiger’s feces and ticks on her body.

According to officials, the tiger was already severely injured, weak and emaciated when it was trapped on Oct. 15.

Her front left paw was missing, an injury consistent with being caught in a snare trap, a common device used by poachers to catch bushmeat.

“We decided to burn [the remains] to reduce any risk of viral infection or diseases that the tiger might have carried,” said Rahmad Saleh, the head of the Jambi conservation department.

The conservation agency had set up the trap following three reported tiger attacks that killed two people between September and October in an area bordering Kerinci Seblat. The park is considered one of the world’s last great strongholds for the Sumatran tiger. Fewer than 400 of the critically endangered big cats are alive in the wild today, more than a third of them in Kerinci Seblat. The park is Sumatra’s largest, and the second-largest national park in Southeast Asia.

The tiger population has plunged in line with widespread destruction of its forest habitat, primarily due to logging and expanding oil palm and pulpwood plantations. Today, only two populations in Sumatra maintain long-term viability, with more than 30 breeding females each. But both of these tiger communities are under serious threat from planned road projects.

Rahmad said the recent tiger attacks on people could be linked to a suspected local outbreak of African swine fever among the wild boars (Sus scrofa) that are a staple of the animal’s diet. Rahmad said his office received reports of tiger sightings near villages coinciding with an increase in reports of wild boars being found dead from unknown reasons. He said the lack of prey might have driven the tigers to roam further out of the forests and close to villages.

The first reported case of ASF came from China in 2018 and has since torn through Asia’s population of pigs. The virus now endangers 11 wild pig species living in Southeast Asia. These species aren’t just important ecosystem engineers, but also are prey for the region’s tigers and leopards.

The Jambi conservation department has sent tissue samples from the dead tiger to a wildlife laboratory in Java for further examination to reveal the cause of death.

This article by Lili Rambe was first published by Mongabay.com on 10 November 2021. Lead Image: The tiger was emaciated, weak and severely injured when it was captured by authorities in October. Image by Lili Rambe/Mongabay Indonesia.

Celeb Pets: Jennifer Garner Posts Adorable Video Bathing Her Cat After a Little Accident
Truffle-eating marsupial on ‘brink of extinction’
Americans love black bears—so why do cruel trophy hunts keep happening?
Farmers tempt endangered cranes back – by growing their favourite food
Cat Came Back to the Woman Who Helped Her Kittens, Now Waits for Perfect Home with Her Daughter