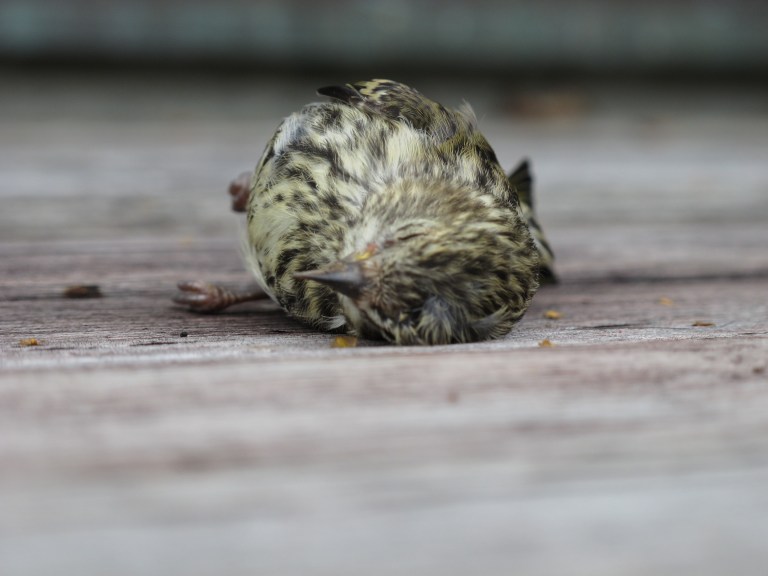 Many of us have had that experience of hearing a loud thump and then looking outside to see a bird that had crashed into a window and is now laying on the ground.

However, many people still believe that these are uncommon experiences. Unfortunately, bird-window collisions account for a huge number of bird deaths every year.

In just one day during October of 2020, over 1,500 birds died after flying into large skyscrapers.

One Audubon Pennsylvania volunteer, Stephen Maciejewski, described watching birds fall from the sky and picking up hundreds of them to examine as he walked around.


Sadly, this was not an isolated incident. Experts estimate that between 365 million and one billion birds die from crashing into glass-sided buildings every year in the U.S. The glass often reflects back the sky and thus, the birds fly right into them without hesitation.

Some don’t sustain any life-threatening injuries, but most are killed immediately or suffer painful internal damage.

Fortunately, there is a solution. Bird-friendly glass can help birds perceive the glass windows as solid objects and adjust accordingly.

At the end of 2019, New York City passed a bill that requires new and remodeled buildings to use bird-friendly glass. San Francisco also has a Standards for Bird-Safe Buildings law.

It’s time that other big cities follow their lead to save the lives of hundreds of millions of birds every year.

Sign this petition to demand that several of the largest cities in the United States — including Boston, Los Angeles, Chicago, San Francisco, and Houston — pass “bird-friendly” glass building ordinances!

Kitten that Hops Like a Bunny, Turns into the Happiest Cat with Endearing Personality
New Species of Bird Discovered in Brazil
Rat poison found in bodies of 80% of American eagles
Spiny new chameleon species described from Bale Mountains of Ethiopia
Kitten Came Back to Woman Who Was Kind to Her and Moved Right into Her House