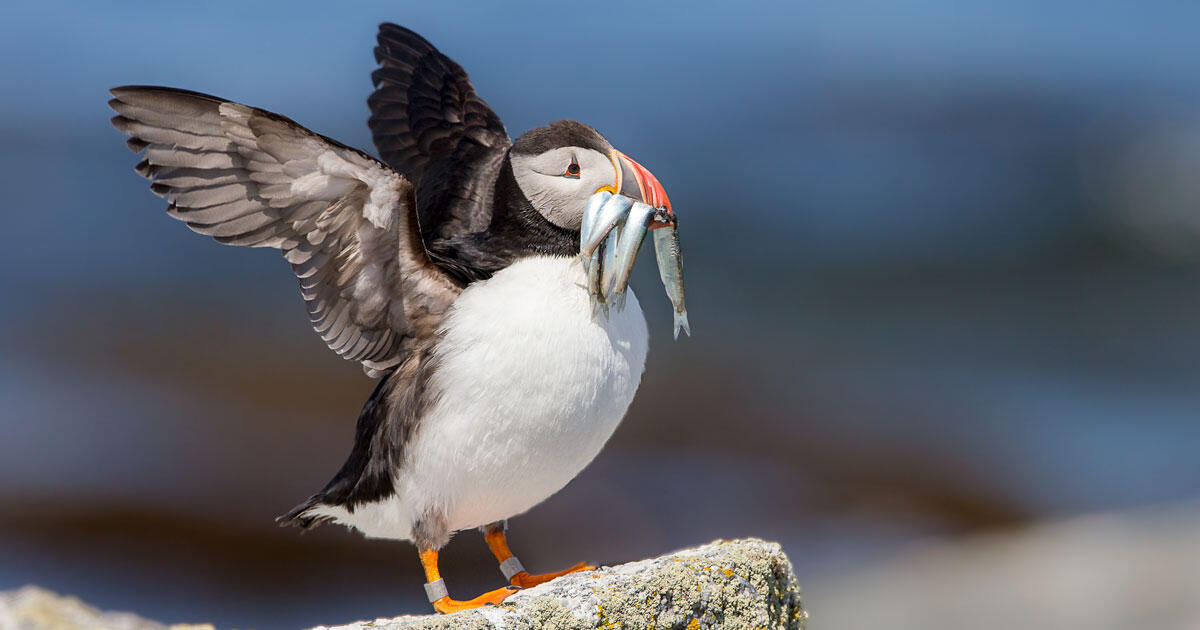 This week the National Oceanic and Atmospheric Administration (NOAA) has announced new protections for the Atlantic herring. These small fish are important not only for packaging in tin cans and pickling jars, but also for seabirds like Atlantic Puffins and Roseate Terns. Developed by the New England Fishery Management Council in 2019, Amendment 8 updates the Atlantic Herring Fishery Management Plan to formally recognize and account for the role of herring as the base of the ocean food web.

Herring are a critical source of food for Atlantic Puffins, the charismatic resident of Maine’s rocky coast. Puffins in Maine are enjoying quite a comeback—after disappearing from the state’s coast completely in the late 1800s due to hunting. The National Audubon Society started Project Puffin (now known as the Audubon Seabird Institute) in 1973 in an effort to restore puffins to their historic nesting islands in the Gulf of Maine. Thanks to decades of persistent effort, islands like Eastern Egg Rock and Matinicus Rock on the Maine coast are now home not only to a healthy population of puffins, but also other seabirds like Roseate Terns, Black Guillemots, and Razorbills. All of these birds rely on a bountiful source of small fish, known as forage fish, to eat and to feed their young.

The new rule ensures that annual catch levels for the commercial herring fishery leave more herring in the water for the marine life that rely on them for food. It also prohibits the use of giant trawls in nearshore waters from Connecticut through the Canadian border. These football-field sized nets pull millions of pounds of herring out of the ocean, disrupting herring spawning and seabird feeding activity. The new prohibition on this type of fishing gear in the nearshore area protects herring spawning activity as well as a concentrated food source for seabirds and coastal water birds.

Protecting herring in these two ways allows puffins to feed more nutritious food to their chicks, creating healthier, more numerous fledglings that can grow up and leave their nesting burrows. Scientists from Audubon’s Seabird Institute found that when ideal fish like herring are not available, puffin parents will feed their chicks a warm-water species called butterfish. Large butterfish are too deep-bodied for the chicks to consume, and they simply can’t swallow them, no matter how hard they try. The year puffin parents most often delivered butterfish to their chicks only 31 percent of puffin pairs fledged a chick at Seal Island National Wildlife Refuge, Maine’s largest puffin colony—compared the usual fledging rate of about 77 percent. Butterfish are becoming more abundant and larger, and that’s why protecting their favorite fish like herring is so important.

More herring in nearshore waters provides numerous other benefits to a wide range of seabird species – benefits that are more important than ever as the climate changes. Keeping more forage fish in areas close to shore and seabird nesting islands means that seabirds don’t have to travel too far from their chicks to find fish. Plentiful herring helps to stabilize seabird food supplies during marine heatwaves and buffer against declines in other fish species. More herring also helps spread the energetic needs of seabirds across many forage species, reducing the pressure on others such as Atlantic menhaden. Finally, the new regulations make more protein- and oil-rich herring available around Cape Cod for long-distance migrants like Arctic Terns, which need to gain lots of fat stores and weight before they fly thousands of miles down to South America.

Overall, this new regulation is a quantum leap forward in fisheries and seabird conservation. It will ensure this critical forage fish for seabirds and the whole marine ecosystem can recover and thrive. It will also help both commercial and recreational fishermen in New England, as herring also serve as food for larger fish like cod and striped bass, and as bait in the lobster fishery. We thank our thousands of members who wrote letters supporting this critical action to protect the food base for our beautiful Atlantic Coast seabirds.

Cat corridors between protected areas is key to survival of Cerrado’s jaguars
Webinar: Where do Baby Parrots Come From? A Veterinary View of Avian Reproduction
Inside Dr. Pepperberg’s Lab: Parrots & Vocal Learning
War against Obesity – 4 Simple Ways to Help Fat Dogs & Obese Cats Lose Weight
Cat with Airplane Ears Showed Up in Backyard, Now Cares for Every Foster Kitten that Comes Through the Door