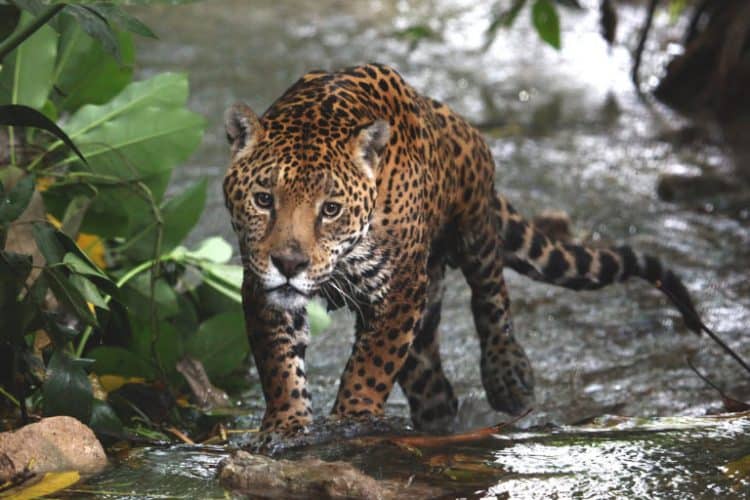 The jaguar population in Mexico increased by about 800 animals from 2010 to 2018, according to the first two censuses of the elusive carnivores ever conducted in the country. The news confirms that Mexico’s national strategy to protect jaguars is working, researchers reported recently in the journal PLOS One.

“It was incredible to see jaguars in so many places where there weren’t any before,” said ecologist Gerardo Ceballos of the Universidad Nacional Autónoma de México, founder of Mexico’s National Alliance for Jaguar Conservation and lead author of the paper.

The jaguar (Panthera onca), listed by the IUCN as Near Threatened, ranges from northern Mexico through Central America, the Amazon Basin, and into northern Argentina.

Ecologists had never properly counted jaguars in Mexico before, making it difficult to design a conservation program in the iconic cat’s northernmost ranges.

The alliance created by Ceballos and his colleagues used the results of the first Mexican jaguar census in 2010 to create a national strategy endorsed by government policy and scientists alike.

He was not involved in the study. “They are connecting science with conservation plans.

It can be a good model for researchers—not only working with jaguars, but all the other big cats or other species that are critically endangered.”

Ceballos and a team of 20 ecologists spanning the country gathered data from photo capture traps to determine where jaguars lived and how many roamed in each of the country’s protected conservation regions. Then, they created a plan to tackle the most critical issues affecting Mexico’s jaguars: preserving wildlife corridors and sanctuaries; advocating for helpful laws and public policy; and avoiding or resolving conflicts with livestock owners.

For example, the government paid people living near protected areas to not deforest sanctuaries, compensated them for cattle losses from jaguar predation, and provided electric fences to prevent jaguars from killing livestock. The on-the-ground efforts paid off.

“Local people have been critical,” Ceballos told Mongabay. “When they have the funding and incentives to protect the forest, they become the most important ally.”

Ceballos expected jaguar populations to stay the same or decrease between 2010 and 2018. Instead, estimated numbers rose by 20%, from roughly 4,000 to 4,800 animals. Mexico’s Yucatan Peninsula hosts about 2,000 jaguars, with others spread throughout coastal and inland habitats across the nation. Brazil hosts the largest continuous jaguar habitat today, with an estimated population of more than 10,000 individuals

Moving forward, the National Alliance for Jaguar Conservation will focus on key threats, especially conflicts with humans and habitat loss.

Morato notes that other wildlife and ecosystems will benefit from these efforts.

“The jaguar is an umbrella species,” Morato told Mongabay. “They need a large amount of area, so if we need to protect a viable population of jaguars with at least 50 individuals, we are going to have many other species protected [within that area].”

In 2022, the Mexican government and the National Alliance for Jaguar Conservation plan to expand the Calakmul Biosphere Reserve in the southern Yucatan Peninsula from 723,185 hectares to more than 1.3 million hectares of land, making Calakmul the largest protected tropical forest north of the Orinoco River—all motivated by jaguar conservation.

“It’s very unusual that scientists can do all these things: research, outreach, conservation, and public policy,” said Ceballos. “And in Mexico we have been able to do that.”

This article by Guananí Gómez-Van Cortright was first published by Mongabay.com on 22 November 2021. Lead Image: Jaguar in a river in Mexico. Photo credit: Gerardo Ceballos.

Man Accompanies Kitten Until She Feels Better, and Ensures Happily Ever After for Her and Her Sister
Bogey The Cockatoo Thrives After New Procedure to Heal Chronic Cloacal Prolapse
Kitten 10 Days of Age Holds onto the Hands that Help Her and Turns into Fluffy Happy Purr Machine
Pet Parent Training Tips For Teaching Your Puppy To Handle Being Alone
Kitten is Ready to Leave Storm Drain Life with His Brother and Emerges from Hiding One Day