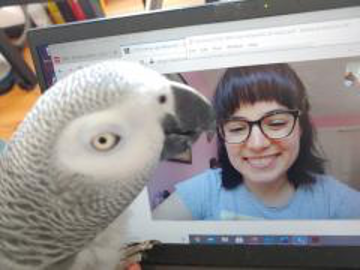 Given that almost everyone is now interacting with friends and family over platforms like ZOOM, Skype, FaceTime, etc., I’m often asked about how parrots might deal with virtual interactions. As with most questions about parrots, the answers are complicated.

The primary issues involve their visual system, which differs significantly from ours. I’m not just talking about the obvious differences, like the placement of their eyes that decreases what is called “binocular overlap” compared to humans or the neuroanatomical differences—but issues like seeing in the UV or having a very different flicker-fusion rate (FFR, the frequency at which an intermittent stimulus appears to be completely steady to the average observer), which play a big role in their ability to process information presented virtually.

For example, the FFR quite likely was one reason that our attempts to train our parrots with video failed (Pepperberg et al., 1998), even though Alex, for instance, would recognize similarity and difference in objects presented via video (Routledge & Pepperberg, 1988). These early studies used monitors with cathode ray tubes (CRT), which rely on human FFR to produce “normal-looking” action. Because parrots’ FFR is about twice that of humans’ FFR, CRT output, rather than being viewed as an integrated whole, may be seen as an interrupted collection of flashing images that might distract the bird’s attention, thus making it difficult to observe the physical objects to be labeled, or even disrupting formation of a connection between audio and visual input—and thus providing one reason why video tutoring failed.

Parrots See What We Don’t

For both the old CRTs and the newer liquid crystal displays (LCD), colors are optimized for the human, 3-cone, visual system, called “tricromatic.” Birds, however, are at least tetracromatic—that is they also see in the UV, and the world looks very different to them. For a description of what we know about their UV vision, read a recent paper by Stoddard et al. (2020). Thus, what they see on a computer screen probably looks extremely different to them from what they see when they look at something that is physically present. That is not to say that they can’t recognize things at all…quite likely they may think “Well, this has the shape of a human and it sounds like a human, so even though it looks very oddly colored, it probably is some kind of human.” Ditto for other items. That may be why some parrots do seem to like watching TV with their owners.

At one point, we re-tried the video tutoring study using LCD screens (Pepperberg & Wilkes, 2004), which do not have flicker fusion issues, and played videotapes to our parrots. Even then, they failed to learn from the tapes. It could still have been color issues, or it could have been the lack of social interaction—the birds just watched pre-recorded tapes, so obviously the humans on the tapes didn’t adjust their behavior to what the bird was doing at the time. African greys are social animals; they probably learn not only vocalizations but also other critical behavior patterns from watching one another and interacting with one another in real time (Todt, 1975). Although they can learn vocalizations (at least) equally well from humans as from other parrots, the interactions likely must also be in real time.

Recently, given the impossibility of using our live, social modeling technique during the need for social distancing during COVID, one of my former students and I tried to model for Athena over ZOOM. We figured that we could be totally interactive, that Athena would recognize her voice and features, that flicker-fusion would not be a problem, and maybe the color weirdness might be acceptable. No such luck. Athena did seem to recognize Francesca—at least she tried to peck Francesca’s nose on the screen the way she would in real-life—but Athena would not attend to the screen while we modeled. It is also possible that Athena noticed a reflection of a grey parrot in the computer screen and was tapping on that, rather than actually recognizing Francesca.

Nevertheless, both Griffin and Athena seem to enjoy whatever it is that they do see on the screens. When with my friend and colleague Leigh Ann and I set up a ZOOM meeting, she brings her two African greys over to the computer, and all four birds make various noises and tap the screen. It’s not clear that they recognize each other visually, but they do make lots of noise. And when I Skyped with Leor, a student who had been gone for a year, both birds initially gave her the “cold wing” to make it clear that her departure had been unacceptable…as in real-life, only after a while were they willing to interact a bit. Again, it was not clear to me as to what was the focus of their responding—her voice or her image—but at least they didn’t find it aversive.

So, in sum…if your birds seem to like to watch TV or interact with computer screens, by all means keep doing that…just don’t believe that what they experience is exactly the same thing that you experience—they may be responding to what they hear, to reflections in the screen, or maybe they simply accept that sometimes things come in very weird colors!