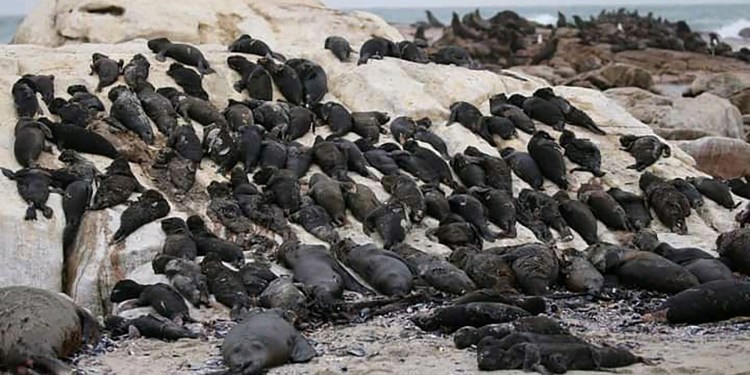 Seal mortalities are not uncommon at this time of the year, but the rapid increase in numbers has alarmed the Department of Forestry, Fisheries and the Environment.

Marine scientists are trying to find out why hundreds of malnourished and dead Cape fur seals have washed up on to the West Coast of South Africa.

The Department of Forestry, Fisheries and the Environment (DFFE) sent its technicians and scientists, specifically dedicated to seals, to do an inspection visit at the onset of the mortalities in September.

“Four of the encountered carcasses were sampled for veterinary tests. Preliminary observations from the DFFE team were that carcasses had signs of undernourishment/malnutrition,” he said.

Nqayi said the mortalities had since increased and coincided with an outbreak of avian flu in the same areas.

“Although seal mortalities are not uncommon at this time of the year, the rapid increase in numbers has alarmed the department and its stakeholders. The department has since approached the state veterinarian at the Western Cape’s Department of Agriculture for assistance with postmortems,” he said.

“Due to the scale of this event, the department is monitoring the situation in cooperation with other conservation management agencies, NGOs, academic institutions and private citizens,” he said.

He said at this time of year there is an increase in natural seal mortalities due to mothers weaning pups of the previous breeding cycle (in this case 2020), in preparation for the next breeding season (October-December).

“In some instances, weaned pups are not strong enough to feed by themselves and will not survive. A similar phenomenon was reported off the Namibian coast in 2020. Officials have also noted from reports that there are cases that involve older animals. These also seem malnourished and convulsions were noted from at least two of the videos shared with the department,” Nqayi said.

He said it is clear that these seals are starving to death.

“Current indications are that mortalities are limited to the West Coast (Lambert’s Bay, Elands Bay, St Helena Bay and Paternoster). The state veterinarian has prioritised testing for avian flu as carcasses are submitted. The department will issue an update upon completion of initial postmortems,” said Nqayi.

“We don’t know why, and all we can do is document the dead and dying.”

Gridley said they were alerted by several reports of higher than normal mortalities of Cape fur seals at Paternoster, Shelley Beach and Elands Bay around September 11-12.

“On September 21 to 23, we found 17 carcasses along a 2km section of Shelley Beach… [At] Lamberts Bay the next day we observed greater mortalities of new born-preterm pups, juvenile and sub-adults. More than 100 dead animals were found around the periphery of the colony; females were birthing pups almost two months early and they did not make it,” she said.

Gridley said at Elands Bay, a smaller colony, they counted 158 dead seals in an hour with distressing scenes of aborted foetuses and emaciated seals.

“Whilst Cape fur seal populations are well known to boom or bust, die-offs are not uncommon. Documenting such events and investigating the cause is worthwhile… such events could indicate the underlying health of the marine ecosystem. In addition to the unhealthy seals, we noted several sick and dying seabirds as well as multiple seal entanglements in fishing lines,” Gridley said.

She said they are feeding data to those responsible for marine resources in South Africa, and working with the marine mammal community to gain a better picture on what is happening at these seal colonies.

Gridley said this time of year for Cape fur seals is a time of high energy demand and some naturally don’t make it.

“Yearlings are now forced to fully wean, and females are heavily pregnant, with pupping due to start in earnest in mid-November. Combined with strong south-easterly winds, we often see high numbers of dead youngsters on our beaches,” she said.

“They are basically dying of starvation due to overfishing. We have rescued over 25 yearlings in the past few weeks and it is sad as many are washing up dead all over the coast,” she said.

Krynauw said their team is also on the ground helping to collect data.

Strandloper Project manager Mark Dixon said the dead seals are a concern and this is occurring along the coastline from Knysna to Hout Bay.

“On our recent expedition we recorded numerous dead seals and plenty of yearlings; this and a few other things do suggest that there is a shortage of food in the ocean, not only for the seals but for other species as well.”

A Woman Allegedly Breastfeeding Her Cat On A Delta Flight To Atlanta Is Going Viral
Kitten Turns into Happy Affectionate Shoulder Cat After Family Helps Him See Through Both Eyes
Jaguars in Mexico are growing in number, a promising sign that national conservation strategies are working
Kitten Who Was Very Small For Her Age, Perseveres into a Feisty Personality with So Much to Give
Orange Kitten Hops the Fence to Join Litter of Smaller Kittens and Decides to Help Raise Them