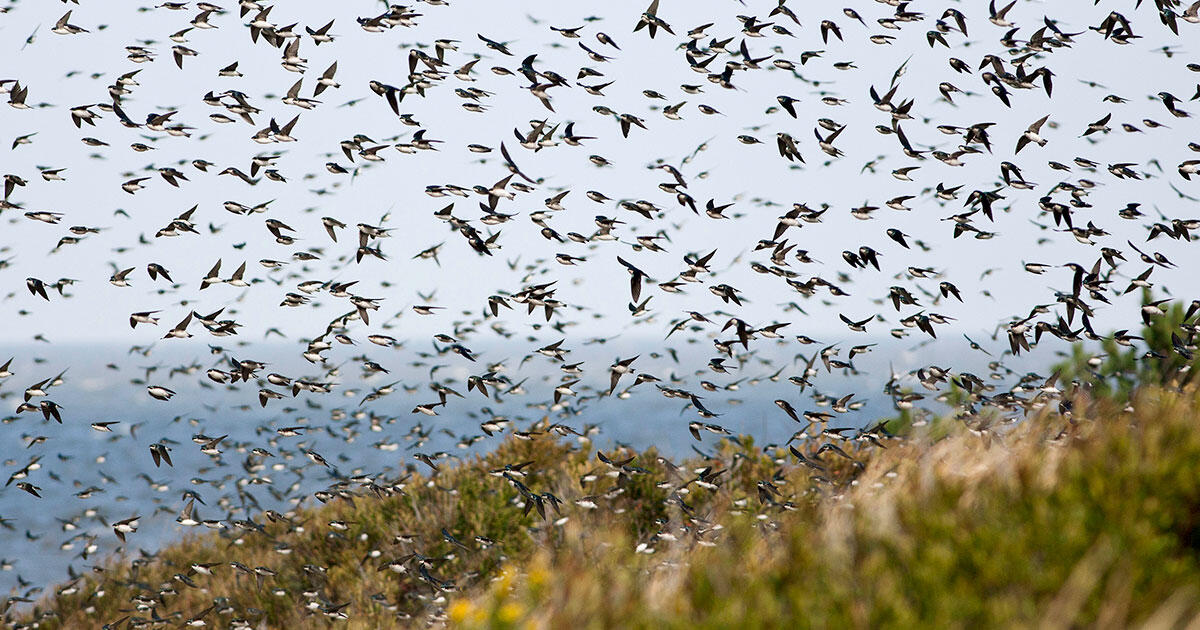 Who’s Kenn? Simply put, Kenn is a national treasure. A renowned birder, author, and conservationist, Kenn Kaufman has spent his life dedicated to observing birds, reading about birds, writing about birds, and sharing the world of birds with others. With all that birdy knowledge in his brain, he also acts as the field editor for Audubon magazine. So, whenever we have a bird question stumping us around the office, we just ask Kenn. And now you can, too! If you have a bird or birding question you’d like Kenn to answer, leave them in the comments below or on Facebook. Maybe next month you’ll get the kind of thorough, thoughtful, and even humorous response from Kenn we’ve grown so fond of over the years. —The Editors

Q: It seems like more migratory birds pass through the eastern U.S. than through the West. Is that true, and if so, why?

Kenn Kaufman: That’s a good observation, and it doesn’t just seem that way: It’s a fact. Looking at the lower 48 states and the southern edge of Canada, there is definitely a higher volume of migration passing through the eastern half, especially if we focus on land birds.

That’s not to say that the birding is necessarily better in the East. The West has more bird species altogether, and the western states can produce spectacular concentrations of migrants in some places—especially of aquatic species at wetlands in arid country, like Great Salt Lake or Salton Sea. But for big numbers of a wide variety of migrant land birds, eastern sites are more productive. This is particularly noticeable in fall, when populations are swelled by all the young birds hatched during the summer. The concentrations of fall migrants at places like Duluth, Minnesota, or Cape May, New Jersey, simply can’t be matched anywhere in the West.

To understand why, we have to zoom out and look at patterns of bird distribution over the whole continent and beyond.

South of the Canadian border, if we’re going to draw a line between eastern and western birds, it makes sense to put the line approximately in the center of the country. Field guide authors in the past often used the 100th meridian, or 100 degrees west longitude, as the dividing line, running from the middle of the Dakotas south through western Nebraska, Kansas, and Oklahoma, and then west-central Texas. It works fairly well in separating species typical of the East from those typical of the West. But heading north into Canada, the dividing line angles westward. On the map above, the brown areas indicate the general locations of mountain ranges, and you can see how the Rockies angle far to the west in Canada. As a result, the “eastern” forest stretches most of the way across Canada. The next map shows the breeding range of a typical “eastern” migrant, the Canada Warbler, as it relates to these highland areas. It extends far south at upper elevations of the Appalachians, and extends even farther to the west in Canada, all the way to the northeastern corner of British Columbia, ending only where it meets the mountains. Dozens of other “eastern” species repeat this general pattern, with breeding ranges extending far west across Canada. Some go even farther: birds like Blackpoll Warbler, Alder Flycatcher, and Gray-cheeked Thrush breed in boreal forests from the eastern edge of Canada all the way across Alaska. As you can see below, some Gray-cheeked Thrushes even cross the Bering Strait to breed in Siberia. The Dark-eyed Juncos nesting in central Alaska are of the eastern “Slate-colored” form, and the Northern Flickers breeding there are of the eastern “Yellow-shafted” form. So, if we look far enough north in Canada and Alaska, a high percentage of the breeding birds present in summer are of eastern affinities. If all those birds flew straight south in fall, they would pass through the western states in large numbers. But they don’t.

If all those birds flew straight south in fall, they would pass through the western states in large numbers. But they don’t. Instead, they start off by moving strongly eastward before they turn more to the south. All over the boreal forest of western Canada and central Alaska, birds depart in fall and migrate east or southeast. They add to the total volume of migrants passing over the eastern half of the lower 48.

But why do they start off moving east? The reasons may be partly historical. As the last ice age came to an end more than 10,000 years ago and the glaciers retreated northward, allowing forests to regenerate, many bird species probably expanded their ranges northward first and then westward at high latitudes. So now their spring and fall migrations may be partly just retracing their original pattern of expansion. Then, too, for forest birds coming from northwestern Canada or Alaska, habitats are more uniform and more reliable in the East. In the West, alternating high mountains and deserts make it harder for such birds to find suitable stopover habitat when they pause during migration. They’re safer if they skirt around the region. You can see the same pattern if you research other west-east species pairs. Look at Lazuli Bunting vs. Indigo Bunting, or Bullock’s Oriole vs. Baltimore Oriole, or MacGillivray’s Warbler vs. Mourning Warbler, or Western Kingbird vs. Eastern Kingbird. In each case, the eastern species migrates farther.

The difference even applies to subspecies groups. Among Swainson’s Thrushes, the “russet-backed” forms breeding along the Pacific Coast from southeastern Alaska to California migrate to Mexico and Central America for the winter, while the “olive-backed” forms that breed all the way from central Alaska to Maine migrate to South America. Not coincidentally, the “olive-backed” forms have a much larger range and population, and they migrate mainly through the eastern states.

One reason why short-distance migration is more feasible for western birds: the western U.S. is contiguous with the mainland of Mexico.

One reason why short-distance migration is more feasible for western birds: the western U.S. is contiguous with the mainland of Mexico. Birds don’t recognize political boundaries, of course, and migrants from the western states can move a few miles or a few hundred miles south of the border, just as far as necessary. But migrants moving south in the eastern states come to the Gulf of Mexico, and then they can’t go just a little farther. They can detour to the west to go around the Gulf, or they can take the risky flight across open water to the Yucatan Peninsula, Central America, the islands of the Caribbean, or South America. But many of these eastern birds inevitably wind up migrating farther as a result.

The topography of the western states also contributes to the trend of short-distance migration there. The West has numerous high mountain ranges interspersed with open lowlands. At the highest elevations, the climate and habitat mimic those of regions much farther north. Birds from the high mountain forests can find much warmer winter conditions simply by moving downhill. A Dark-eyed Junco breeding in spruce forest high in the Colorado Rockies might move 100 miles south and 4,000 feet downhill to a lowland valley for the winter. By doing so, it achieves the same climatic shift as another junco that migrates 1,000 miles south from central Canada to Arkansas. That’s an extreme example, but many western birds cover relatively short distances because they shift elevation as well as latitude. As a final point, birds that are truly long-distance migrants in the Americas have to shift eastward in fall migration, simply because South America is located farther east than North America. Consider, for example, the Buff-breasted Sandpiper, which migrates from high Arctic breeding grounds to wintering areas in southern South America. Part of the population migrates through the Great Plains, while others take a more easterly route over the open waters of the Atlantic; but only a handful stray west of the Rockies, and those that do are going unnecessarily far out of their way, since they will have to shift eastward to reach South America.

These are a few of the concepts that come into play when we consider why more birds migrate through the East. One of the great things about studying bird migration is that it leads us to think about our own place on the map, and how it fits in with larger patterns. It reminds us that these small travelers connect us with the rest of the world, and that we have a shared responsibility to work for their conservation.

Kitten So Happy to Be Saved She Keeps Kneading Away in Bliss After Being Brought Back from the Verge
Die-Off of 5,000 Seal Pups on Beach Triggers Inquiry in Namibia
Pine Siskins Have Taken Over the Country
Cat Goes To Beach For The First Time And Has Very Strong Opinions About It
Breaking! 62 Bears Killed On First Day Of New Jersey’s Bear Hunting Season; Help Us End The 2020 Hunt