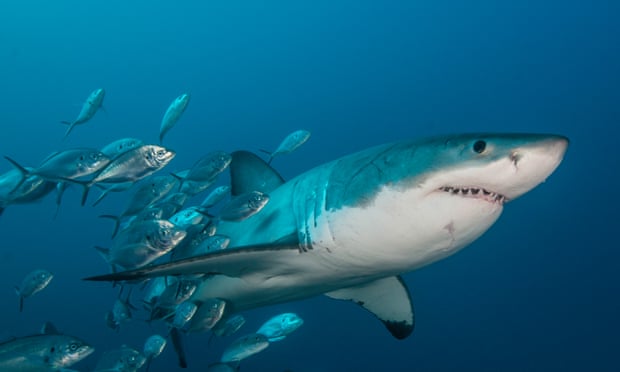 On the rare occasion a great white shark attacks a human, the bite may be the result of mistaken identity, according to new research.

A study by Australian scientists suggests the apex predator may not be able to visually distinguish surfers and swimmers at the water’s surface from their natural prey.

“They’re not these mindless killers, but we just happen to look like their food,” the study’s lead author, Dr Laura Ryan of Macquarie University, said.

The team compared video footage of swimmers, people paddling surfboards, and seals from the perspective of a great white shark viewing from below in the water.

Taking into account what a shark is likely to see when looking up at a person or seal against the background skylight, the researchers concluded that neither the silhouette shape nor motion cues were enough for a shark to clearly tell them apart.

The research supported the theory that great whites do not actively seek out humans as prey.

Great whites are thought to be more successful in hunting prey at the water’s surface. Sharks are also thought to be colour blind, or to have only limited ability to perceive colours at best.

“Their acuity, or their ability to see detail, is much lower than ours,” Ryan said.

As part of the study, the researchers estimated the visual acuity of great whites based on the structure of their retinas. They focused specifically on juvenile great whites, which are responsible for a large proportion of attacks on humans.

“Between about 2.5 metres and 3.5 metres [long] is when they start to incorporate seal into their diet,” Ryan said. “In terms of the entire sensory repertoire, they’re not as finely tuned as an adult who’s obviously more experienced.”

There did not seem to be any visual difference between swimmers and surfers, which Ryan said was surprising. Previous research suggests that surfers are at the highest risk of fatal shark bites, particularly from juvenile great white sharks.

A better understanding of why sharks bite humans would help to develop strategies to mitigate against them, Ryan said. “We’re trying to change the silhouette [at the water’s surface] and looking at the role of the silhouette in bites by white sharks, which can include using lights or counter illumination.”

Ryan said more research was needed into other species involved in shark bites, such as bull shark and tiger sharks. “We’re not sure if mistaken identity applies to them. Seals aren’t a common prey item for them but they do consume things like turtles … and things floating at the surface.”

This article by Donna Lu was first published by The Guardian on 27 October 2021. The study was published in the journal Royal Society Interface. Lead Image: A study by Australian scientists suggests great white sharks may attack humans because they can not visually distinguish surfers and swimmers at the water’s surface from their natural prey. Photograph: By Wildestanimal/Getty Images.

Celeb Pets: Jennifer Garner Posts Adorable Video Bathing Her Cat After a Little Accident
Jaguars in Mexico are growing in number, a promising sign that national conservation strategies are working
Utah Rescue Group & Humane Society Pilot New Program To Sponsor Feral & Stray Cats
Victory! After public outcry, there will be no spring bear hunt in Washington
Kitten Who Was Very Small For Her Age, Perseveres into a Feisty Personality with So Much to Give