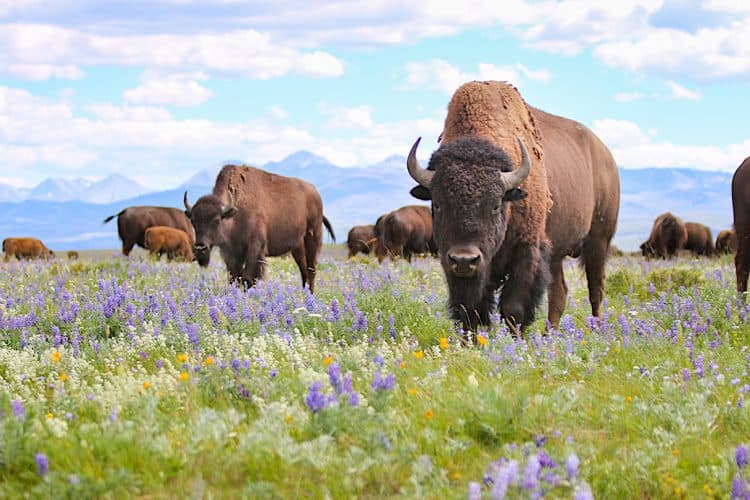 Humanity is living through four interrelated global crises: biodiversity, climate, pandemic, and social justice. Because the nature and scale of threats to the planet and all its life forms is so pernicious and unprecedented, these crises often seem difficult for scientists, conservationists, and political leaders to fully grasp, let alone take concrete steps toward systemic change.

Indigenous traditional ecological knowledge—so often minimized or just poorly known—can offer us a critical model on how to effectively and holistically address such fundamental challenges.

We must now craft novel conservation models that spark a new relationship with nature while dissolving the barriers that divide us from the natural world, each other, and ourselves. We need strategies that draw on the wisdom of the past while elevating equity and justice. In the American West, that future requires that our efforts to conserve nature begins with the people and communities who call the Rocky Mountains home.

There is no better guide for this uncharted journey than the North American bison—and no better story to learn from than those of past leaders and visionaries who, against all kinds of odds, succeeded in saving from extinction a keystone species of such significant biocultural importance: our brother, the buffalo.

In 1800, some 30 million buffalo thundered across North America, contributing in countless ways to the lives of Native peoples. Buffalo were slaughtered by United States military policy to weaken Indian tribes, and they were also slaughtered by other settlers for quick financial gain, often taking only tongues or skins while leaving the rest of the buffalo to rot. Reduced to fewer than 1,000 individuals, this North American icon faced imminent and immutable extinction.

An often-told narrative of how the bison was saved from that fate revolves around Teddy Roosevelt and the American Bison Society. The Society, created in 1905 with the participation of then-President Roosevelt and led by the director of the Bronx Zoo, famously shipped 15 Bronx Zoo bison from Grand Central Station to Oklahoma with the intent to reintroduce bison herds to the American West and initiate the recovery we see today.

But that’s not the whole story. In addition to the few remaining wild bison within Yellowstone National Park, the Séliš, Ql̓ispé, and Ksanka people of Montana, officially known as the Confederated Salish and Kootenai Tribes (CSKT), played an equally decisive role in preventing buffalo’s extinction. In the 1870s, a Ql̓ispé man named Ɫatatí, acting on the vision of his father ʔAtatic̓eʔ, brought a group of orphaned bison calves across the Continental Divide to protect them and essentially create a conservation and subsistence herd on the CSKT’s Flathead Indian Reservation.

This herd would expand over the next several decades to become the largest remaining plains bison herd in the world.

Understanding CSKT’s role in the recovery of bison is important as a matter of knowing history and recognizing true conservation visionaries. It is also relevant in the context of the current moment of reckoning for past acts of racial injustice, and transforming conservation from a force too often tied to colonization and dispossession to one that recognizes the critical role of Indigenous-led conservation in realizing our collective vision for true and enduring ecological stewardship.

For centuries, the bison has been a biocultural keystone species that has enriched the landscape through its grazing. Native peoples depended upon buffalo for every aspect of their lives, from food and clothing to spirituality and ceremony. Its decimation was both an ecological tragedy and a horrific act of cultural destruction.

To make matters worse, in 1908 land at the heart of the Flathead Indian Reservation was taken by the U.S. government without the Tribes’ consent for the creation of the National Bison Range. Tribal citizens were neither welcomed at the Range nor even allowed to work there for decades.

Using federal laws for Indian Self-Determination and Tribal Self-Governance, the CSKT long sought participation with Bison Range management and reunification with the buffalo there. The Tribes ultimately drafted legislation to restore the Range to federal trust ownership for the CSKT—an effort that the Wildlife Conservation Society and many other conservation groups supported.

The U.S. Congress in 2020 passed this legislation returning the National Bison Range to the Confederated Salish and Kootenai Tribes, whose skilled natural resource managers are now taking over as stewards of the Range’s buffalo, land, and other wildlife. This action honors not only the Tribes’ treaty, but also the Tribe’s relationship with the Buffalo Nation and conservation leadership.

The biocultural restoration of bison— reconciling the injustice experienced by the Salish, Ql̓ispé, Kootenai, and so many other tribes in North America—is a model to address the global crises we face today. In the American West and beyond, we have an opportunity to recognize and listen to Indigenous science and traditional ecological knowledge to ensure lasting conservation outcomes for the wildlife and wild places we all hold dear.

Orange Kitten Hops the Fence to Join Litter of Smaller Kittens and Decides to Help Raise Them
Utah Rescue Group & Humane Society Pilot New Program To Sponsor Feral & Stray Cats
Oregon Veterinarians Warn Of An Uptick In Feline Panleukopenia, A Deadly Virus
Truffle-eating marsupial on ‘brink of extinction’
A Woman Allegedly Breastfeeding Her Cat On A Delta Flight To Atlanta Is Going Viral