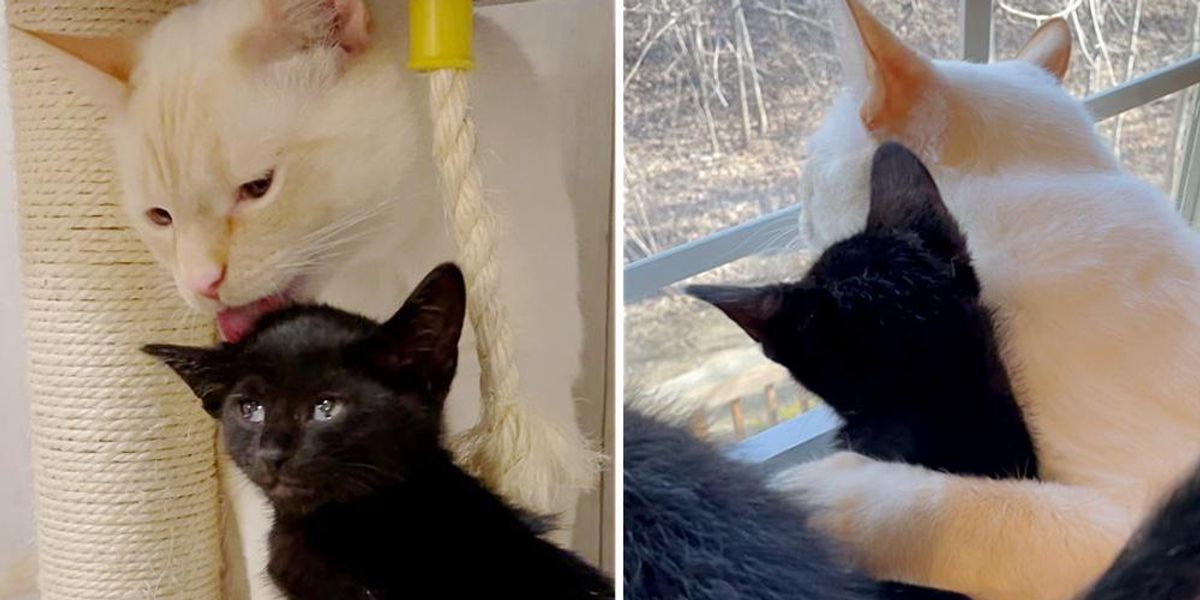 A cat took three kittens under his wing and began caring for them after they were found in an alley.

Three weeks ago, a litter of six kittens was spotted in an alley in Indianapolis, Indiana without a mother in sight. They were surrendered to IndyHumane (an Indianapolis-based animal rescue) in a box and in need of foster care.

Volunteers of the rescue stepped up to help to ensure that all the kittens would have a chance to thrive in a foster home. Three of the kittens went to Jennifer and the others were taken in by Penny.

Bear, one of Jennifer’s resident cats, has been a great help with every foster kitten that comes through the door. He first came to Jennifer as a foster himself over a year ago, and the sweet cat never left.

The new foster kitties (Fletcher, Olive, and Mara) came out of their carrier and started exploring their new digs, where they could find plenty of good food and an assortment of toys to play with.

“The kittens were a little skittish at first, but settled right in. They were very playful and curious right from the start and loved all of the new toys,” Jennifer told Love Meow.

“I could tell they were missing their mama cat a lot, so I gave them a heating pad and a stuffed heartbeat ‘mama’ for comfort.”

Bear could hear the squeaks of the newcomers from the foster room. His ears perked up and started counting the days for a formal meet-and-greet.

When the kittens were medically clear, Bear was given the green light to visit his little buddies. They sniffed each other through the panels of the playpen.

“The kittens weren’t so sure about Bear at first, and there was a lot of puffing up and hissing. They were curious though, and would ‘follow’ him when he was around the outside of the pen.”

Bear could hardly wait to dote on the kittens and took it upon himself to get in the pen. It didn’t take long for the trio to realize that he was friend not foe.

When Bear started washing their faces, the kittens slow blinked with contentment and leaned in for more. “He provided additional comfort by grooming them like their mama used to do” Jennifer shared with Love Meow.

Watch Bear and his foster kittens in this cute video:

[embedded content]
Bear the cat and his foster kittens

“Now they are all purrs when he is around. They like to play with him and ask him for hugs and licks.”

As soon as Bear enters the room, the kittens come running to him for some TLC. They watch him play attentively, trying to hone their feline skills.

Papa Bear keeps them under his watchful eyes and showers them with love.

The sweet cat is over the moon having foster kittens all around him.

“Bear is a very happy-go-lucky cat with an easy-going personality. He was a foster himself, so he knows the drill. He’s really good with all of the fosters he’s been able to interact with so far,” Jennifer told Love Meow.

“His big kitty brother, Bodie, grooms him a lot, but never really lets Bear return the favor, so I think he enjoys having kittens around who accept his love!”

All three kittens have extra digits on their paws and big personalities to boot.

“They have one extra toe on each paw for a total of 22 toes. Cats typically have 18 toes (five on each front paw and four on each back paw).”

After a rough start in life, the six kittens are thriving in foster care and will be ready for adoption via IndyHumane when they are big enough.

As of now, Bear is busy caring for his foster babies and loving every second of it.

Related story: Kitten Finds Family of Her Dreams and Wins Everyone Over with Her Endearing Personality

Healthy Oils To Add To Your Dogs Diet
Fruit-eating, seed-pooping animals can help restore degraded forests
Kittens Found Playing in Family’s Backyard on Snowy Day, Turn Out to Be Sweetest Pair
Kitten Bounces Back from Being So Tiny and Becomes Sweetest Friends with One-eyed Cat
Kitten with Sweet Face is Given Fighting Chance and Determined to Thrive and Live Full Life