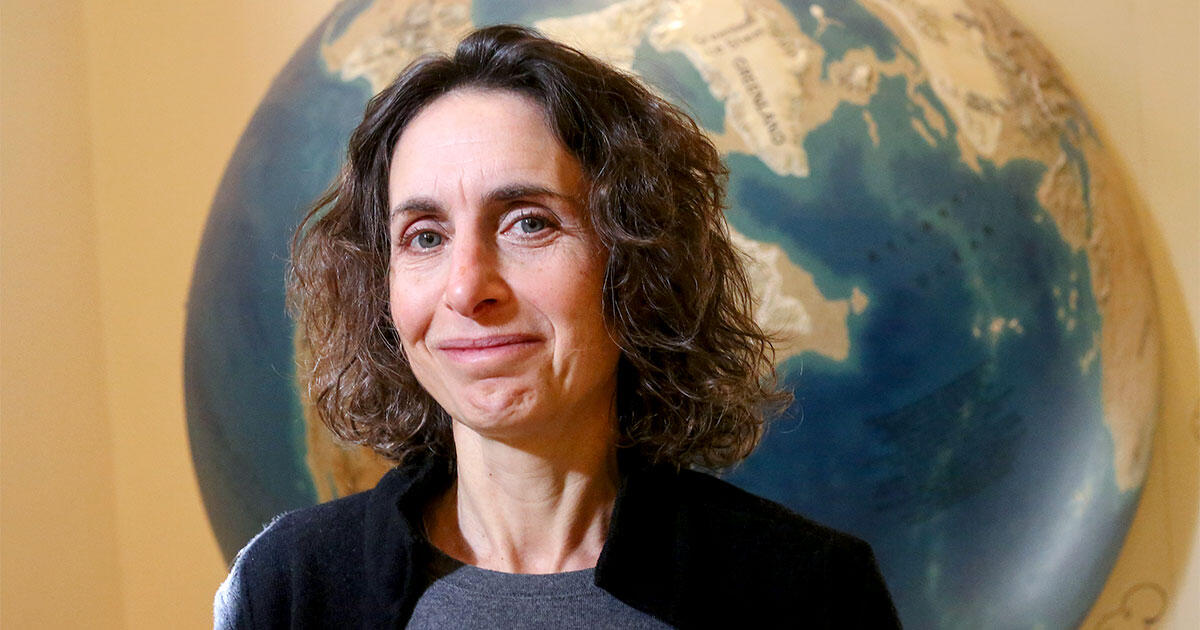 Back in 2014, Elizabeth Kolbert’s The Sixth Exinction—a Pulitzer-winning account of the outsized chaos human beings have unleashed on Earth—made the case that the most disruptive thing to happen to the world since a meteor hit 65 million years ago was us. As homo sapiens colonized the planet, we wiped out or dominated every species we encountered. Wherever we went, we altered ecosystems and eventually the climate, sometimes without noticing.

Now, many consequences of human actions are all too obvious. Some, like climate change, are catastrophic. But what if human tinkering—the impulse that caused us to inadvertently alter the atmosphere, purposefully reroute the world’s great rivers, and catalyze only the sixth known mass exinction event in the planet’s history—is the very thing that might save us? That’s the question posed by Kolbert’s latest book, Under a White Sky, published February 9. To answer it, the longtime journalist traveled around the world to document the ways that people are beginning to tinker with nature to counteract the effects of our earlier interference.

The journey takes her, among other places, to the Chicago River, which has been electrified to mitigate the spread of a purposefully introduced invasive carp; to the Mojave Desert, where a backup population of a tiny pupfish species is being coaxed to thrive in an exact simulacrum of the only cavern it inhabits in the wild; to Australia, where scientists breed heat-tolerant corals that they hope will be more resilient than those dying in the wild, and other scientists try to genetically modify a poisonous toad. Closer to home, Kolbert interviews scientists at Harvard researching solar geoengineering, which would involve shooting reflective particles into the stratosphere to cool things down on Earth, thus creating the “white sky” of the book’s title.

Audubon recently caught up with Kolbert to discuss the new book, and what human beings may have in store for the planet next.

Audubon: How did Under a White Sky come to be?

Kolbert: In some ways, it is a logical outgrowth of The Sixth Extinction. A few years ago, I went to do some reporting in Hawaii about a project that’s at the center of the book, a project aiming to speed up evolution of corals—to try to induce them to be more heat-tolerant so that they could withstand climate change. It occurred to me that we’re really at this new start of a new chapter in our long and vexed relationship to the natural world. We are now not just monkeying around with natural processes—building dams, throwing a lot of carbon into the atmosphere, all the ways in which we’re changing nature. But we are now trying to change the natural world to counteract the ways that we’re changing the natural world. I started to see this pattern in a lot of different realms, and that sparked the book.

A: How did you decide, as a journalist, where to go and what examples of this pattern to report about?

K: Once the idea started to hatch, and I started seeing this pattern, some examples were obvious. They were things I already knew about from covering climate change for many years and was interested in. For example, the whole idea of carbon dioxide removal: We put too much CO2 up there, and now we’re going to have to try to figure out how to get it out. And the idea of geoengineering or solar radiation management: Well, we’ve thrown a lot of carbon—so much carbon—up into the atmosphere that is trapping so much heat near the surface of the earth that we’re going to have to re-engineer the stratosphere to reflect more sunlight back to space.

And then, in other cases, I went looking for stories that I felt really were emblematic, or had a really profound metaphorical significance or resonance. For example, I ended up going to the Mojave, to this simulacrum of a habitat for a fish that lives only in one pool: the Devil’s Hole pupfish, that lives only in this one cavern in the Mojave. People have altered the cavern by pumping the groundwater out, and it was driving the fish very close to the brink of extinction.

The measure that was decided on was to have backup pupfish, and to build a complete simulacrum of their cavern. You know, there are a gazillion instances of driving a species extinct and trying to take radical steps to either recreate their habitat or train them to avoid predators, all sorts of amazing things. But this particular case—of having built a whole fake cavern—struck me as a great example. I went looking for the best examples I could find, the most vivid or interesting examples of the phenomenon.

A: I’ve noticed that throughout your work. There are always examples framed by incredibly strong story elements of character, setting, and so on. How do you know when you’ve found the right one?

K: [Laughs]. That’s the scary part—until you go, who knows, you can’t be 100 percent sure. This book involved going halfway around the world to Australia, among other places. But you’re using your imagination to imagine, “Okay, what am I going to find when I get there?” And some stories have a pretty rich and layered history. The Devil’s Hole pupfish had a history that goes back several decades, and there is a complicated story of our involvement with this fish. There’s a richness there. You think, “Okay, that’s probably a great story, that’s a really interesting place to go.” But I was really fortunate in this book in that I met a lot of people who were very generous with their time and their thoughts, and I went to some amazing places and got to see some amazing things. In this particular series of reporting trips, I never came away saying, “Oh, why did I do that?” But that can happen to a reporter.

A: Your recent work no longer just covers the day-to-day or even decade-to-decade effects of climate change—you’re looking into extinctions, or these massive projects that could affect centuries or millennia. What was the thread that took you from your early reporting on climate change to a book like Under a White Sky?

K: I started out covering climate change back in the early 2000s when it was actually hard to go somewhere and have scientists say, “Okay, this is clearly the effect of climate change.” Scientists are actually extremely conservative. They were very slow to say, “We are convinced that this is because of climate change,” without several decades worth of data, and that was just starting to happen.

Now, you can go absolutely anywhere and find a clear signal of climate change because the problem has gotten that much worse and more obvious over the last two decades. There’s a lot of great reporting on the impacts of climate change now, and it seemed like a better idea to branch off and try to see over the horizon a little bit. That was the impetus for the latest book.

A: We’re, of course, doing this interview for Audubon, which focuses a lot on species conservation. Much of the work that people do to save various species—and there are so many examples of this in your book—involves altering previous ways that we’ve altered the natural world. How do you suggest that people who care about species protection think about efforts like these?

K: Well, that’s a really profound question, and to be honest that is the question at the center of the book. One of the points is, what do we think of as conservation, right? Like, “Let’s just conserve this the way it is”—that’s becoming increasingly impossible because of climate change, among other things. We’ve just changed the world so profoundly that we can no longer just fence off and preserve a piece of land; even if we don’t allow most human activity within it, the world is being changed so profoundly, and from a distance.

And so, we’ve reached this weird point. I use this quote from The Leopard, it’s a very famous quote from the book, that goes, “Everything must change for everything to stay the same.” But that’s the basic point: Just to keep things the same, we need to change them. And that’s a paradox. And I don’t have a clear set of answers to these questions. But I think that they’re the questions we’re going to be grappling with for the rest of this century. How do we preserve as much as we can of the natural world, even as it changes really fast, and really profoundly?

A: Your work also often brings up questions of what we ought to save, and how, and why. That’s true for species but also human settlements, like the example of New Orleans in the book.

K: That’s a really interesting issue. Another theme of the book is that we could, theoretically, retreat and try to rethink problems from the ground up across all these realms. And there are a lot of realms. We’re talking about climate and introduced species, we’re talking about sea level rise. We could really be trying to scale back on all fronts. But as humans, you know, part of our success is not doing that. It’s digging in, and doubling down.

New Orleans is an interesting example. The city was founded in the early part of the 18th century, long before people had much sense of the geology of the region and what was at stake. It turned out, as we now know, that the whole Mississippi Delta was formed by constant flooding: The river would overflow its banks, it would drop a lot of silt towards the mouth of the river, and it would create a lot of land.

As soon as people settled along the Mississippi, they said, “Well, we don’t want flooding,” because, you know, that’s very annoying. “We don’t want the river to move, because we need the river there.” Over the last two centuries or so, we have imposed more and more control over the Mississippi River. It is just completely straight-jacketed at this point. The consequence is that we no longer get flooding, we no longer get new silt—and the whole place is sinking into the sea. And when you combine that with sea level rise, it is a really precarious situation.

And there are people who will say that we should be relocating people out of New Orleans—but everyone loves New Orleans, I mean, I love New Orleans! As a political option, it is simply not available right now. I suppose if things get bad enough, maybe it will be. But in the meantime, people are coming up with all sorts of engineering schemes. We’re going to re-engineer things and, once again, we will see how successful it is.

This interview has been edited for length and clarity.

Kitten Found in Window Well Wins Over Family that Saved Him, and Blossoms into Beautiful Cat
Healthy Oils To Add To Your Dogs Diet
The Terrifying Truth: Our Future is Tied to the Future of Sharks
Kitten with Sweet Face is Given Fighting Chance and Determined to Thrive and Live Full Life
Cat corridors between protected areas is key to survival of Cerrado’s jaguars