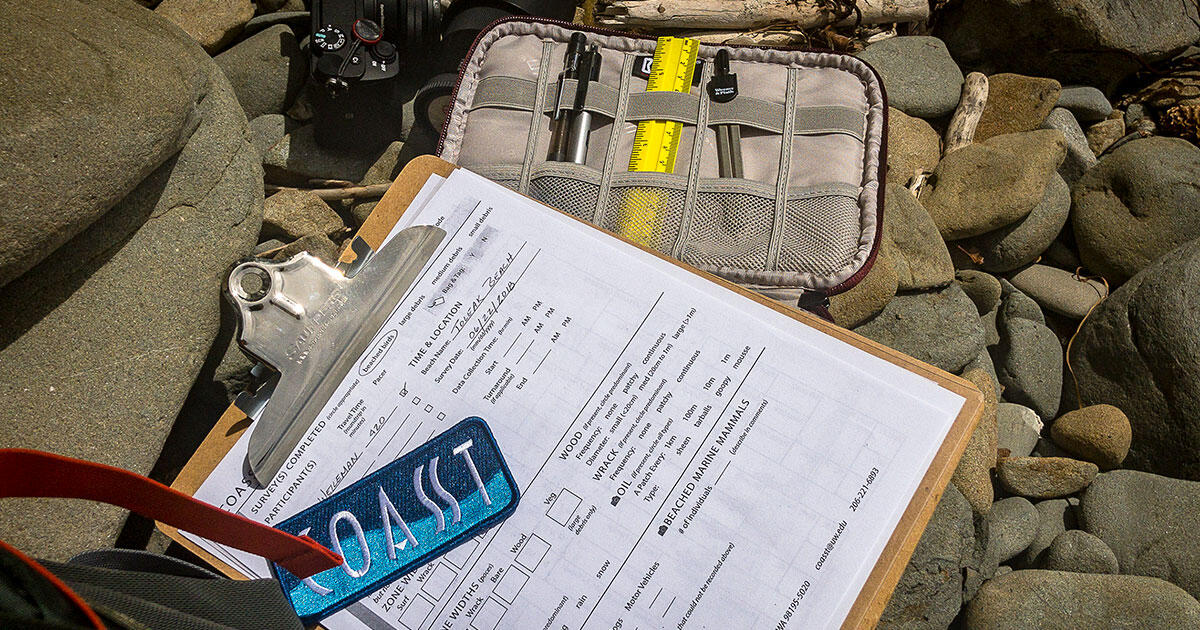 The mailroom at the University of Washington’s School of Aquatic and Fishery Sciences looks pretty much like any other: rows of identical cubbies, each just a few inches tall, enough space to tuck a few letters inside. “And then there’s the COASST mailbox, and it’s like a foot and a half,” says Julia Parrish, executive director of the Coastal Observation and Seabird Survey Team, a community science project housed at UW. “We get more mail in a day, I would say, than the rest of the department put together.”

The reason for all that mail is that COASST relies on more than a thousand residents of coastal communities from California to Alaska to look for dead seabirds and marine debris on shorelines in their communities, document their findings on paper data sheets provided by COASST, and send them in for Parrish and her colleagues to analyze. Participants help COASST scientists keep track of how natural and human-caused events like algal blooms, oil spills, and plastic pollution affect birds from Common Murres to Rhinoceros Auklets. By looking at the data, the COASST team can map the root causes of population shifts in marine wildlife, providing great insight into how coastal ecosystems respond to human activity.

Unlike other scientists whose work has been interrupted by the COVID-19 pandemic, the COASST team has experienced almost the opposite effect. Their volunteers are itching to get out of the house, and collecting data is a good excuse. But now Parrish and her colleagues are dealing with a logistical problem: Their mail isn’t getting delivered on time. “If it used to take us two or three days to get something from us to you in your little town,” Parrish says, “now it takes two or three weeks.” The program has an option for entering data online, but it can be a time-consuming challenge for some participants, especially rural residents with poor internet connections. Without the sheets she sends them, many participants can’t go out and conduct surveys, which means the project could miss out on large chunks of valuable data.

The COASST team and scientists around the country are feeling the effects of a postal slowdown resulting from a series of cost-cutting measures implemented by Louis DeJoy, who became Postmaster General in June. Mailboxes and mail-sorting machines have been removed, delivery schedules and routes modified, and overtime slashed, which means carriers aren’t able to deliver all their mail before the end of their shift. Multiple courts have ordered the U.S. Postal Service to halt any more changes, but the cutbacks have already done significant damage: 711 sorting machines have been removed, and on-time scores have dropped in 91 percent of the country. As Americans deal with the realities of the slowdown—from missed birthday cards to delayed medications and the looming specter of an election that will see a record number of people vote by mail—conservation scientists are starting to grapple with what an unreliable USPS might mean for their own work.

“I literally do not know how any field work would get done in Alaska without the Postal Service.”

Perhaps nowhere in the country is reliable mail more essential than in rural Alaska, where in some cases it’s among the only links to the outside world. “I literally do not know how any field work would get done in Alaska without the Postal Service,” says Natalie Dawson, executive director of Audubon Alaska. For scientists like Dawson, a wildlife biologist, it’s the only way to transport field equipment like mist nets, microscopes, and camping supplies to isolated sites that aren’t accessible by road—the USPS uses small planes to reach them—or served by private competitors like FedEx or UPS. “Whenever I’m preparing for field research, I spend hours getting gear ready to lug to the post office and then hope it reaches the remote P.O. box I’m sending it to on time,” Dawson says.

The mail is also an important communication tool for scientists hoping to expand the reach of their conservation efforts. Aimee Tomcho, a conservation biologist for Audubon North Carolina, sends personalized letters and postcards to recruit potential participants in her effort to preserve Golden-winged Warbler habitats in the Appalachian region. “Eighty-five percent of the land in North Carolina is privately owned,”  Tomcho says, “and when you’re trying to do this kind of science on private land, it’s really personal.”

Tomcho uses addresses available in public records to contact landowners whose property she thinks might contain the open, scrubby woodlands where Golden-winged Warblers breed, and she offers to work with them to make their land particularly friendly to the little songbirds, whose numbers have plummeted by two-thirds since the 1960s. Sometimes, says Tomcho, the collaboration ends up making birders out of landowners who previously wouldn’t have cared much for the warblers. “I’ve had landowners say ‘these are my birds,’” Tomcho says. The program has been so successful that Tomcho is helping expand it to promote programs focused on the Prothonotary Warbler in coastal North and South Carolina. Continued cuts to mail delivery, however, would put those expansion plans on hold.

At times, USPS staff even gather scientific data themselves. Every year, thousands of rural mail carriers in Wisconsin, Kentucky, and a handful of other states spend a few days keeping an eye out for Ring-necked Pheasants, Northern Bobwhites, and other game species they can see on their regular mail routes, recording their sightings, and sending their data back to their state’s wildlife agency. It’s a system that relies on the service at every step, says Jessica Rees-Lohr, a research scientist with Wisconsin’s Department of Natural Resources: The agency sends survey sheets to rural mail carriers using the USPS, postal workers conduct the surveys, and when they’re done they put the completed survey sheets in the mail to get them back to Rees-Lohr and her colleagues. “The only cost to us is printing and mailing out those letters,” Rees-Lohr says, “and the amount of data and the quality of data you get back just can’t be beat.”

The nearly half-century-old Wisconsin survey only asks postal workers to count pheasants; this year about 600 mail carriers covered 35,000 miles of roads in 32 counties. Rees-Lohr can’t imagine how her department could conduct the survey without them; the agency doesn’t employ nearly as many biologists as there are mail carriers in the state, she says, so cuts to the USPS in those areas would inevitably affect the survey data. Without the mail carrier surveys, she says, “we would lose this long-term data set that we’ve had since 1972, and we wouldn’t be able to tell how populations were responding to our efforts.”

Back in Washington, Julia Parrish is worried about the missed data, but she’s also thinking of what USPS cutbacks will do to the human relationships COASST relies on. “Our participants are out there, month after month in all kinds of weather doing the really, really basic data collection without which we couldn’t do the science that we do,” Parrish says. “We strive to thank them six ways to Sunday for that work.” One way she shows her gratitude is through a hand-signed postcard. “We are the only organization, I guarantee, which will send you a nondenominational holiday card with a dead bird on the cover,” Parrish says, “without the mail service, we just can’t get them that. We’re losing touch at a time in our history when we need that so much.”

POLL: Should dogs be banned from beaches during the nesting season?
Rescue Cat Reality TV
Kittens with Sweetest Smile Seek Attention from Everyone and Hope for Dream Home Together
Woman Helped Kitten, Couldn’t Stop Thinking About Her and Traveled Across States to Bring Her Home
Kitten Found in Backyard with His Siblings, Grew Unique Coat, Determined to Thrive