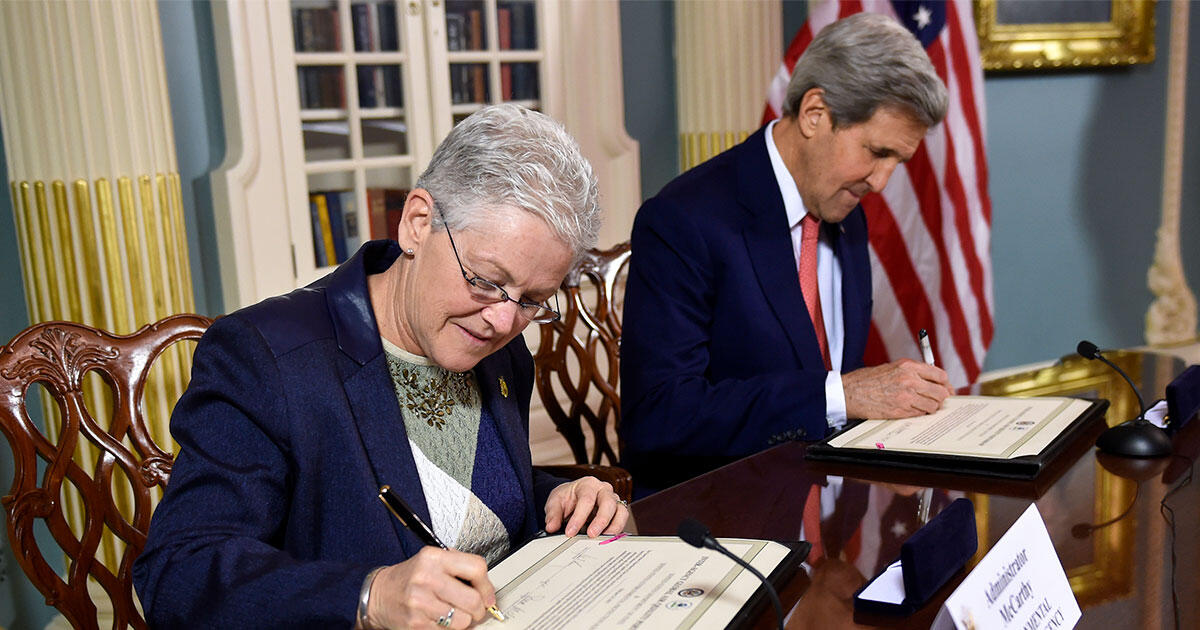 In the lead-up to his inauguration, President-elect Joe Biden raised the climate crisis to the highest government offices last month when he established two new White House positions. The roles—a Special Presidential Envoy for Climate and a National Climate Advisor—are expected to coordinate Biden’s climate-related campaign promises through a dual approach, with one role focused externally on national security and international relations while the other works on domestic policy.

Both unofficially dubbed “climate czar,” the positions will advise Biden from within the executive branch. The Special Presidential Envoy will reside on the National Security Council, which coordinates issues of national security among federal offices, while the National Climate Advisor will be geared toward domestic matters and granted oversight across many agencies. The Biden administration is the second in history, after President Obama, to establish a presidential advisory role with a climate focus and the first to attach cabinet and national security access to a climate-related appointment. The moves signal to policymakers and activists that not only does the administration intend to prioritize climate change throughout the executive branch, but it also sees climate-driven threats to agriculture, water, and infrastructure as national security issues.

Since the announcement, the Biden team has shared little information on the Special Envoy’s potential powers and scope. One major indication, however, is the person he’s chosen to fill it: John Kerry. While serving as Secretary of State under President Obama, Kerry was a key negotiator in the Paris Agreement, and he’s expected to lead the new administration’s work to rejoin the climate treaty after Biden’s inauguration on January 20. His diplomatic experience is key, according to the job title: ‘Envoy’ implies senior emissary status, focusing on Kerry’s strengths as an international negotiator.

“I would assume that Kerry is going to be someone that gets dispatched to meet with a lot of foreign leaders to see how we can collaborate with them better, and then nudge them in the direction of greater ambition on climate change,” says Jesse Young, a former senior advisor to the Obama administration’s climate envoy and current climate change policy lead with Oxfam.

Kerry also brings climate-related experience from outside of government. During Trump’s presidency, he co-founded World War Zero, a bipartisan organization that aims to bring U.S. carbon emissions down to net zero by 2050. The effort mirrors Biden’s stated support of net-zero emissions by 2050, a campaign promise that comes with a $2 trillion budget to enact.

The second White House position on climate complements Kerry’s international focus, but instead focuses inward on the U.S. government. It will be filled by Gina McCarthy, the former U.S. Environmental Protection Agency (EPA) chief during the Obama years and current chief executive of the Natural Resources Defense Council (NRDC). McCarthy’s legacy as the progenitor for the nation’s earliest climate change regulations while leading the EPA, along with her recent position controlling climate action from one of the country’s largest environmental nonprofits, suggest how she might coordinate domestic climate policy from her new seat in the West Wing.

Both positions come with power and influence that climate advocates have wanted to see for a long time.

“Gina has led NRDC with a can-do spirit, indomitable will and clear-eyed vision of what it means to address the climate crisis head-on,” said Kathleen Welch, chair of NRDC’s board of trustees in a press release. Her time with the EPA shaping the Clean Power Plan—which established the country’s first-ever national standards for reducing carbon emissions from power plants—earned her a reputation as a climate policy architect. More recently, McCarthy’s accomplishments with the NRDC have come through the courts: She led the nonprofit in more than 100 lawsuits against the Trump administration, fighting for everything from endangered species to lower greenhouse gas emissions.

With a direct line to the president and sway within the executive branch, both Kerry and McCarthy’s positions come with power and influence that climate advocates have wanted to see for a long time. “Biden’s team wants to elevate a senior official at the White House who deals just with climate to all national security decisions,” Young says. “That puts Kerry on the same footing with the Department of Defense and the Treasury Secretary and the Secretary of State in internal planning decisions made by the U.S. government.” McCarthy’s reach will extend to federal agencies, housed within the executive branch, that have yet to address climate change. She is expected to direct these agencies to develop policies that reduce carbon emissions.

The power instilled in these roles will be especially useful for leveraging agency actions that side-step Congress, where previous climate leaders in the executive branch have been foiled. Carol Browner, a former EPA director, joined the Obama administration in 2009 as the first-ever climate czar and director of his Office of Energy and Climate Change Policy. The role emphasized domestic climate and energy legislation in Congress. But Browner’s work was stifled by a Republican-controlled House of Representatives. This time, Biden will have Democratic control in both houses of Congress—but Democrats will still need to work with Republican allies in the Senate to secure enough votes to pass major climate legislation.

Key players in the climate movement have largely applauded the newly appointed climate czars. In statements, the Environmental Defense Fund described Kerry as a “well-positioned” to act aggressively on climate change, and the Sunrise Movement highlighted McCarthy’s past in pushing Biden and others in power on “bold and brave” climate action. “A senior position devoted to addressing the climate crisis sends a powerful signal that the United States is ready to return to the global fight against climate change,” says Sarah Greenberger, Audubon’s senior vice president for conservation policy. Some critics, however, note Kerry’s previous policies around fossil fuels and trade efforts could indicate a less progressive position when fighting the biggest drivers of climate change. Still, after four years of inaction and reversals of existing climate policy, these early moves point to a light at the end of a very dark tunnel for advocates of climate policy.

The Biden transition team did not respond to a request for comment.

Kitten Begins to Thrive When Another Cat Takes Her Under His Wing
Shark attack in Perth’s Swan River leaves man seriously injured
Campaigners condemn killing of minke whale trapped in nets in Japan
Biden Revs the Executive Branch’s Climate Engine After Four Lost Years
Ask Kenn: How Many of the World’s Bird Species Have Gone Extinct?