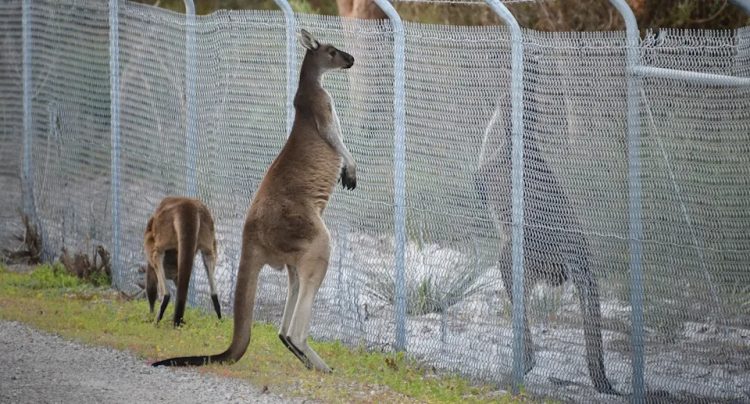 Three hundred kangaroos will be shot to make way for a new road and sports facility in Western Australia, if a proposal is accepted.

A 99-page draft environmental assessment, prepared for the City of Canning in June recommended against relocating the “land-locked” kangaroo population living at the 67-hectare site.

The draft report advised finding a new home for the animals would be difficult, adding the process would be “time consuming” and “costly” at between $600 and $1600 per relocated animal.

Warning translocation would likely result in high mortality, they added Victoria does not support translocation, despite a current trial being underway in the state’s eastern suburbs.

They also said tranquillised animals couldn’t be sold for their meat due to the presence of chemicals.

Alternatives including doing nothing, maintaining a sustainable population, scaring, fertility control and herding were assessed but not recommended.

Poisoning, snaring and hunting with dogs were ruled out for being illegal and cruel.

Shooting would provide a better welfare outcome and only cost $30 per animal, the draft report concluded.

Despite increased urbanisation across Canning Vale, 13km south of Perth, a small population of western greys have survived.

They live on the city’s landfill and recycling facility as well as bushland bordering Ranford Road, with their movement restricted by fencing, buildings and roads.

Council documents conclude the kangaroos are plagued by overpopulation, disease and pose a risk to public health and safety.

The region is also home to a number of western brush wallabies and southern brown bandicoot that the council plans to preserve, and there are concerns fencing areas to restrict kangaroo movement could affect these species.

To improve traffic flow to the airport, planned development will see a new road, the Jandakot Eastern Link, dissect the area, leading to fears the kangaroos will cause vehicle accidents.

Portions of bushland will be cleared and a new sports facility erected, leaving land parcels fragmented and just 22 hectares of bushland retained in an area where over-grazing has already been highlighted.

Assessors concluded that once developed, the site could sustain less than two kangaroos if environment department (DBCA) guidelines are followed.

Council documents indicate the City of Canning identified the cull has the “potential to cause outrage within the community”, including among First Nations people.

Noting that previous culls by local governments led to media coverage and a “reputational crisis”, the council has recommended transparency in discussing the “contentious issue”.

They have considered consulting with a First Nations land manager, and requesting they lead implementation of the plan.

“It would be appropriate, given the above, to consult a First Nations Land Manager and let them provide advice on, and even lead, the implementation of the plan,” the contentious issues management plan said.

Council concluded culling the kangaroos with Indigenous engagement would pose medium risk, but considered it high-risk to proceed without engagement which could lead to national media coverage, public outrage, social media coverage, an online petition, and loss of trust in the City of Canning brand.

“Ensuring there was some engagement bodes better for the City’s reputation,” one council document said.

“If the information still makes the public eye we will have a better story to tell our community.”

An integrated approach including culling as well as exclusion fencing and the removal of food and water sources was the final conclusion of the draft management plan.

Western grey kangaroos are protected under the biodiversity act and to proceed with the cull the council would have to attain approval from the DBCA.

The City of Canning did not respond to any direct questions about the kangaroos, and instead issued a one line statement.

“The City is considering options to manage the increasing population of kangaroos in bushland south west of Ranford Road – which are impacted by existing and upcoming works in this precinct,” it read.

This article by Michael Dahlstrom was first published by Yahoo News on 18 November 2021. Lead Image: Three hundred kangaroos will be shot if the recommendations of a draft management plan are adopted. Source: Supplied.

Pet Parent Training Tips For Teaching Your Puppy To Handle Being Alone
Kitten is Ready to Leave Storm Drain Life with His Brother and Emerges from Hiding One Day
Kitten 10 Days of Age Holds onto the Hands that Help Her and Turns into Fluffy Happy Purr Machine
Man Accompanies Kitten Until She Feels Better, and Ensures Happily Ever After for Her and Her Sister
Lafeber’s Global Parrot Conservation Spotlight: Echo—The Parrots & People of Bonaire