The Hainan gibbon (Nomascus hainanus) is described as “The world’s most critically endangered primate.” In fact, its numbers are said to be much lower than any other primate on Earth. It’s found in just a single block of forest on Hainan Island, China, and nowhere else.

Like so many similar creatures, it travels through the forest canopy, tree-to-tree. But major disturbances, like roads or landslides, can produce major gaps or gorges which restrict its movements. This, in turn, can make it harder for it to feed or breed, but easier to be killed by predators.

So researchers decided to conduct an experiment. In 2015, they installed motion sensor cameras and enlisted the help of professional tree-climbers (above). They used strong ropes tied to sturdy trees to bridge a 15-metre-wide gully formed by a natural landslide. It had become a barrier separating two areas of gibbon habitat.

After a wait of almost six months, their efforts paid off. The gibbons – mostly mothers with younger members of the family – were first captured on the camera traps – actually using the bridge. (See top photo, above.) Adult males and larger juveniles seemed to prefer leaping across the gap together, instead.

Well over a year after the experiment began, more than two hundred photos and over fifty videos showed many gibbons belonging to the family group involved in the study, using the bridge. (Gibbons are territorial and live in family groups.)

As the authors conclude, “The study highlights the use and value of rope bridges to connect gaps in forest canopies. Although restoring natural forest should be a priority conservation intervention, artificial canopy bridges may be useful short-term solutions.”

In an email to FOW, the head of the study, Dr. Bosco Chan of the Kadoorie Conservation China Dept. in Hong Kong, explains further.

“Landslides created by heavy rains occur throughout Hainan Island, and I believe it is very common in areas affected by tropical cyclones throughout the world. So, yes I believe rope bridges can provide short-term solution to restore forest canopy connectivity in these places.

“In fact, artificial canopy bridges are quite widely applied in South America, Australia, and also see some attempts in Africa and more recently Asia, for natural disasters like the one we described, but also in forest fragmented by roads, pipelines and other artificial structures or disturbances.

“I do not believe the survivorship of this critically-endangered gibbon relies on building canopy bridges. But it surely helps alleviate impacts of forest fragmentation locally.” 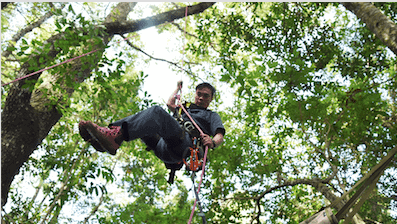 The findings were published recently in Nature. Lead Image: Hainan gibbons started to use the canopy bridge 176 days after installation. Females and small juveniles were the faithful users. All photos by Kadoorie Farm and Botanic.Garden.

I’m a veteran eco-journalist living in Shoal Lake, Manitoba, Canada. I have a life-long love of wildlife & natural places. After working for radio and TV stations for about 30 years, I’ve turned to science writing as a freelancer specializing in the Earth Sciences. I’m a member of the Science Writers & Communicators of Canada and the American Association for the Advancement of Science. I’m authorized to receive embargoed material through the Science Media Centre of Canada, the Royal Society, NatureResearch and the World Health Organization. This allows me advance access to important, peer-reviewed research often warning of habitat loss and the threat of extinction facing many wild species, usually thanks to human intrusion and intervention by the hand of man. They then often become “hot-off-the-press” stories which are ready to publish the moment the embargoes are lifted. I publish www.PlanetInPeril.ca (PinP) “Where Science Gets Respect.” I own professional photographic gear and am sometimes able to enhance my stories with my own images.

Pine Siskins Have Taken Over the Country
Philadelphia Sees Largest Mass Collision Event in the City in 70 Years
Banff wolves have lower survival rate due to hunting, trapping outside park boundary
The Cutest Christmas Sweaters For Your Pet
From safaris to slaughter: Butchered for valuable horns, rhinos are among the tragic victims in a new poaching epidemic – as Africa’s deserted game reserves lose the tourist millions that protected its wildlife wonders