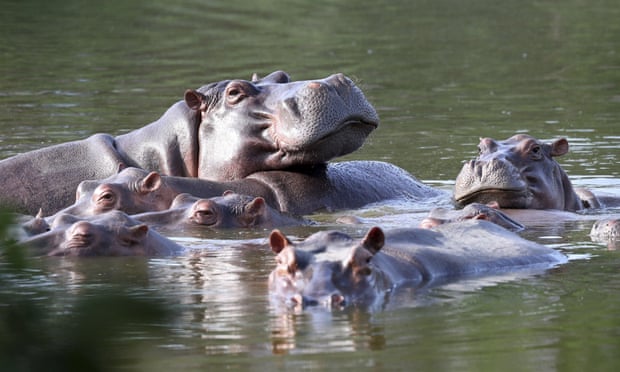 In the US, a federal court has recognised the hippos as “interested persons” with legal rights. But the case to really watch out for is that of Happy the elephant

For all those who keep up with Pablo Escobar’s “cocaine hippos”, some happy news: a federal US court has recognised them as “interested persons” with legal rights.

The hippos owned by the late Colombian kingpin, and their many descendants, have been the subject of a lawsuit against the Colombian government, which is seeking to kill or sterilise them. From the four hippos illegally imported by Escobar in the 1980s, there are now as many as 80 of them, left to wander from his vast private zoo and posing a growing threat to people and biodiversity.

The ruling on Monday will have no bearing on the hippos’ actual fate, because the US court has no sway over Colombian authorities. But the Animal Legal Defense Fund, which lodged the case, has hailed it as a “narrow but profound” victory in its longstanding efforts to grant animals additional rights under US law.

Courts in India, Pakistan and Argentina have already recognised the legal “personhood” of animals; indeed, in Colombia, they are permitted to sue (a crux of the federal court’s decision to recognise Escobar’s hippos). But so far, efforts to extend their rights under US and UK laws have been met with scepticism.

The scoffing provoked by the idea seems somewhat perverse when there is little proportional about either country’s relationship to animals. See: Tiger King, the chi-chi “pet boutiques” in even the most desolate of small towns and the mind-numbing saga of Geronimo the alpaca – all against a backdrop of the slaughter of animals for consumption. (Meat consumption actually increased through the pandemic.) We already privilege a minority of animals as people anyway.

But the case to watch is that of Happy the elephant, to be heard next year in the New York court of appeals. Happy’s self-appointed lawyers are invoking legal protections for imprisoned people to argue for her release from the Bronx Zoo to a sanctuary.

In the meantime, legal commentators have poured cold water on the significance of the cocaine-hippos court order. All it means, wrote litigators at Duane Morris in Washington, is that some hippos in Colombia may have some very limited rights in the US – “at least in the southern district of Ohio”.

This article by Elle Hunt was first published by The Guardian on 28 October 2021. Lead Image: Hippos in the Hacienda Napoles park, the Colombian former estate of drug kingpin Pablo Escobar. Photograph: Fernando Vergara/AP.

Oregon Veterinarians Warn Of An Uptick In Feline Panleukopenia, A Deadly Virus
Jaguars in Mexico are growing in number, a promising sign that national conservation strategies are working
Farmers tempt endangered cranes back – by growing their favourite food
Victory! After public outcry, there will be no spring bear hunt in Washington
City told to slaughter 300 kangaroos in grim, ‘money-saving’ plan