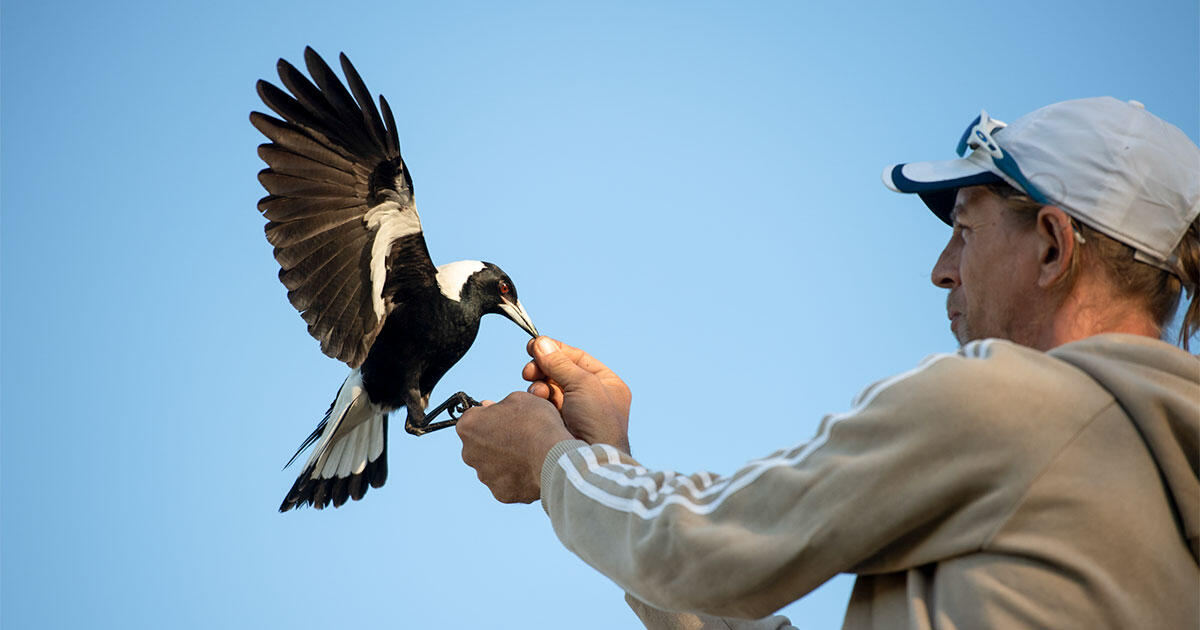 Actress Naomi Watts typically doesn’​t have to worry about being pooped on by her castmates. But in her latest movie, Penguin Bloom, her co-stars were birds.

“I placed the magpie on Naomi’s head, walked out of shot . . . and pretty much automatically the magpie went to the loo,” says Paul Mander, the bird trainer on set. “It ran all the way down her nose and across her lips and dripped off her chin,” he says. “Nobody really knew how to react to it. As soon as Naomi started laughing, it broke the ice.”

The Netflix film, released on January 27, tells the real-life story of the Bloom family. After Sam Bloom, played by Watts, suffered a life-changing injury, she and her family found support and inspiration through a rescued Australian Magpie chick her kids dubbed “Penguin” for her black and white plumage.

Mander, who also directs the Broadwings Raptor Training Centre in Brisbane, Australia, has trained and worked with a huge range of species throughout his career but says magpies are especially playful, curious birds. “It makes them great fun to work with,” he says. “They make very good students.”

Because the Blooms raised Penguin from when they found her as a fledgling until she was an adult, Mander says a total of eight magpies of varying ages were cast for the role. To prepare, he read through the script before filming, noting scenes where the birds would need to perform certain behaviors. Mander says he was able to train the magpies to do almost everything the script called for, including stealing a tea bag out of a mug, perching on a shoulder, and lying on her back while cuddling with the family in bed. Mander taught the magpies using positive reinforcement, which usually came in the form of a tasty mealworm. ​For the scenes that weren’t possible to film with real birds, the team relied on computer-generated imagery.

Mander says he only had a few weeks to work with the birds before filming began. “I had to fast-track a lot of the training and spend a lot of time with the birds in the early stages to build trust and build a relationship with them so that when we took them on set, they were very much at home.” He then spent a couple of weeks with the magpies on set—the Bloom family’s actual home in New South Wales—so that they could get comfortable before the cast and cameras showed up. But not everything was scripted. “We did have some beautiful moments where the birds were just being birds and doing their thing on set and the cameras were rolling,” Mander says.

Having multiple birds on set—especially one with so many people and distractions—came with both challenges and benefits. “Probably one of the most difficult things to get the magpies to do on set is to get them to sit still, because they’re very inquisitive,”  Mander says. But when the birds would get restless, bored, or too full of mealworm treats, they could easily swap out the avian actors. “We trained some of the birds to do specific things that they were really good at,” he says. “They all had their role to play.”

Even with all the switching, the distinct personalities of two magpies named Wendy and Gerry made them easy to identify by those who know them best, says Bridget Thomson, who hand-reared the birds with her twin sister, Sophie. Together, they lead educational wildlife shows and rescue and rehabilitate Australian animals. Bridget describes Gerry as an “active, cheeky, playful little boy,” while Wendy is “a little bit more stoic.” When she watches Penguin Bloom, Sophie says, “I can tell what bird it is straight away if it was one of ours.”

Australian Magpies are familiar perching birds found across the continent. There are nine subspecies: five are white-backed and four are black-backed, like Penguin. Because a mixture of subspecies was cast to play the titular role, Wendy and the other white-backed magpies had their lighter-colored feathers camouflaged with a safe, water-based dye. “We painted it on with a little paintbrush and most of the time they sit there quite enjoying it because they think you’re cleaning their feathers for them,” Mander says.

Despite the close bond between Penguin and the Bloom family, Sophie warns against trying to raise a wild bird with the hope that it will become a family pet. In addition to being harmful for the birds, magpies specifically require diligent care, stimulation, and ample space, or they can become aggressive. “If you’re not on top of these guys, they’ll definitely start training you,” Sophie says.

Bridget and Sophie hope that the movie will be a boon to magpies’ social status in Australia. The birds often get a bad rap for a behavior called swooping, in which some territorial males become aggressive during breeding season and dive at the heads of unsuspecting humans. Only a small percentage of magpies swoop and by simply avoiding an area, says Sophie, you can dodge an unfriendly interaction.

Swooping may be the Australian Magpies’ best-known behavior, Mander says, but the story of Penguin and the Blooms “allows people to see a very different side to magpies, a very sweet side and a very loving side.”

Webinar: Grey Parrot Anatomy Project: An Update & Relevance to all Parrot Species
Inside Dr. Pepperberg’s Lab: Parrots & Vocal Learning
Webinar: Where do Baby Parrots Come From? A Veterinary View of Avian Reproduction
Cat corridors between protected areas is key to survival of Cerrado’s jaguars
Kitten with Rare Condition Strives to Grow Big and Strong and Won’t Let Anything Slow Him Down