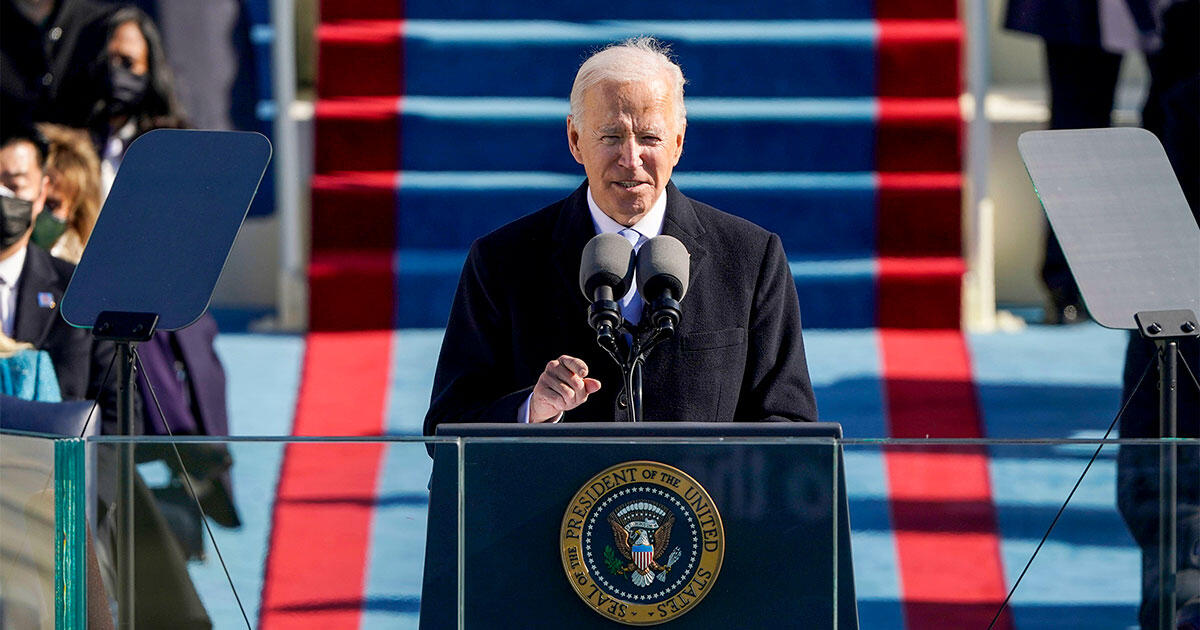 On January 20, after his swearing in, President Joe Biden gave an inaugural address that outlined the country’s many challenges he must face as the leader of its executive branch. The bulk of the speech carried a demand for unity and for truth as we tackle the “cascading crises of our era.”

He listed the crises one by one. An ongoing, once-in-a-century pandemic has taken 400,000 American lives and left millions in financial calamity. A fight against systemic racism that persists 400 years after the first enslaved Africans reached U.S. shores. A violent movement of white supremacist and nationalist terrorists has risen. And an ever-warming climate threatens to collapse ecologies and entrench inequities, and demands immediate action.

“The cry for survival comes from planet itself, a cry that can’t be any more desperate or any more clear,” Biden said from behind bulletproof glass to the socially distanced crowd gathered before the U.S. Capitol, where only two weeks before a mob attempted to violently overturn the presidential election results. “We’ll press forward with speed and urgency, for we have much to do in this winter of peril and significant possibilities, much to repair, much to restore, much to heal, much to build, and much to gain.”

His speech bound together the multiple crises, all exacerbated by lies and denial, and promised urgent action to address them. The new administration started later that day through a series of executive orders—presidential directives on how to enforce or approach the body of law overseen by the executive branch, including 15 federal agencies as well as other independent federal bodies such as the U.S. Environmental Protection Agency.

The Order’s Principles, in Full

“It is, therefore, the policy of my Administration to listen to the science; to improve public health and protect our environment; to ensure access to clean air and water; to limit exposure to dangerous chemicals and pesticides; to hold polluters accountable, including those who disproportionately harm communities of color and low-income communities; to reduce greenhouse gas emissions; to bolster resilience to the impacts of climate change; to restore and expand our national treasures and monuments; and to prioritize both environmental justice and the creation of the well-paying union jobs necessary to deliver on these goals.”

Climate change was at the top of the list. Biden immediately signed an order to rejoin the Paris Agreement, the international treaty that binds countries together in holding each other accountable for reducing carbon emissions. For the United States to meet its Paris targets, it will need to transform its domestic energy and climate policy. But before Biden can begin directing new programs to address the climate crisis, he has to start by undoing some of the damage done by Trump’s industry-friendly, climate-denying administration. To that end, Biden signed an executive order that instructs each agency to review all policies crafted during Trump’s term that are “inconsistent with, or present obstacles to” a set of guiding principles that center science, public health, and environmental justice.

These principles all apply to how the administration will approach climate policy. The order’s directive to “listen to the science” outright rejects climate denial, an oil industry strategy that sows distrust in climate science to protect profits. Climate change is fundamentally a public health issue: Greenhouse gases produced by fossil fuels will irreparably alter the environment that supports human life and are therefore pollutants regulated by the Clean Air Act. And the petrochemical industry’s impacts are racist: Communities of color are exposed to more air pollution and face greater risks from climate change such as heat waves and sea level rise due to past and present inequitable policies. Climate policy therefore demands environmental justice.

To meet these guiding principles, the executive order calls on agencies to review a primary set of regulations, all of which could be amended to reduce carbon pollution. It implores the EPA to reconsider rules about how the oil and gas industries manage emissions from methane, a potent planet-warming gas. It asks the EPA and the Transportation Department to take a second look at the Trump administration’s rollback of fuel-economy standards, which push automakers to manufacture vehicles that go farther on less fuel. The Department of Energy will reexamine its energy-efficiency guidelines for appliances and buildings, and the EPA will review self-imposed legal and scientific limits on its authority to regulate air pollution.

The order also has implications for new oil and gas development upstream of carbon emissions. It places a moratorium on fossil fuel development in the Arctic National Wildlife Refuge and reinstates an Obama administration ban on offshore drilling in some areas of the Arctic Ocean and Bering Sea. It also revokes a permit for the Keystone XL pipeline, which would carry crude oil extracted from below Canada’s boreal forest to refineries in Texas.

Those are just starting suggestions. The order asks agency heads to submit longer lists of Trump-era regulations they’d like to revise or rehash. A draft document, published on Biden’s transition website before he took office, tallies 104 potential target policies across the agencies. That list includes 48 regulations under the EPA alone, and another 31 under the Interior Department, several of which address oil and gas extraction on public lands. There are likely more to come.

Taken together, the order has enormous scope—spanning at least 10 government agencies and calling for the review of four years of Trump administration work. After reviewing the last administration’s various regulations, agency heads will surely have their own ideas of new ones to promulgate. And this is just the beginning of the administration’s climate work: Biden’s early appointments of two climate czars in the White House, including one on the National Security Council, telegraph his intention to use all the levers of government to address the global crisis.

It’s an enormous task. Through his inaugural address and day-one order, Biden is signaling that his administration is prepared to face it head-on. Whether his administration will be able to make up for four years of lost time, or the slow-moving bureaucracy of government procedure can match his promised pace, remains an open question.

“It is a time for boldness, for there is so much to do,” he said on the National Mall on Wednesday. “We will be judged, you and I, for how we resolve the cascading crises of our era. Will we rise to the occasion? Will we master this rare and difficult hour? Will we meet our obligations and pass along a new and better world for our children? I believe we must and I believe we will.”

Inside Dr. Pepperberg’s Lab: Parrots & Vocal Learning
Cat with Airplane Ears Showed Up in Backyard, Now Cares for Every Foster Kitten that Comes Through the Door
Gone fishing: the fight to save one of the world’s most elusive wild cats
Kitten with Rare Condition Strives to Grow Big and Strong and Won’t Let Anything Slow Him Down
Jaguars in Suriname’s protected parks remain vulnerable to poaching