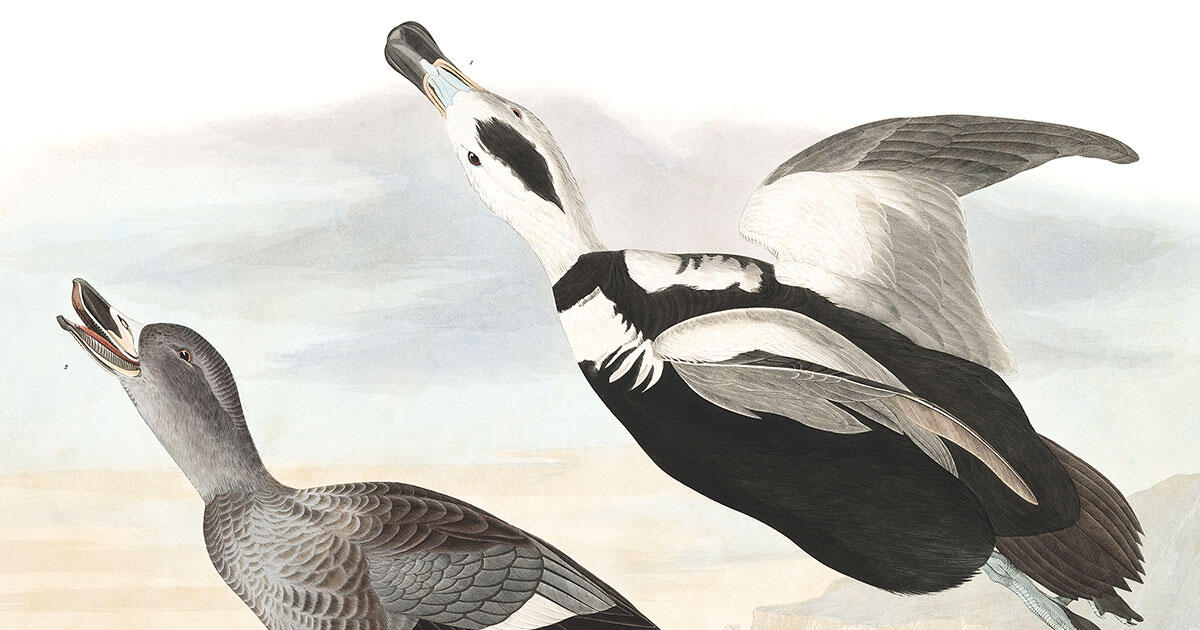 Who’s Kenn? Simply put, Kenn is a national treasure. A renowned birder, author, and conservationist, Kenn Kaufman has spent his life dedicated to observing birds, reading about birds, writing about birds, and sharing the world of birds with others. With all that birdy knowledge in his brain, he also acts as the field editor for Audubon magazine. So, whenever we have a bird question stumping us around the office, we just ask Kenn. And now you can, too! If you have a bird or birding question you’d like Kenn to answer, leave them in the comments below or on Facebook. Maybe next month you’ll get the kind of thorough, thoughtful, and even humorous response from Kenn we’ve grown so fond of over the years. —The Editors

Q: How many of the world’s bird species have gone extinct?

Kenn Kaufman: It can be depressing to think about the sad finality of extinction. But it’s also essential for conservation work: The more we understand extinctions of the past, the better our chances of preventing more in the future. So scientists have made concerted attempts to study the phenomenon, and to tally accurate lists of extinct species.

Unfortunately, it’s impossible to know how many bird species we’ve lost in earth’s history. The most widely used lists of endangered and extinct species are those maintained by the International Union for Conservation of Nature (IUCN). The IUCN Red List of Threatened Species is a global database, frequently updated, that classifies species in a range of categories: Least Concern (for those that apparently are doing fine), Near Threatened, Vulnerable, Endangered, and Critically Endangered. Beyond those threat levels are the species listed as Extinct in the Wild (for those surviving only in captivity) or Extinct.

To be included in the Extinct category, species must be known to have survived past the arbitrary date of 1500 A.D., or about the time that European exploration and colonization were beginning to have an impact around the world. (Species that disappeared earlier, like dinosaurs or woolly mammoths, don’t make the cut.) The bird data in the IUCN list, maintained in cooperation with BirdLife International, are quite comprehensive. So we might assume that we could look at this list and say precisely how many bird species have been lost in the last 520 years.

Surprisingly, however, we can’t even give an exact number for this time period. We can’t even come close. And there are some intriguing reasons why we can’t.

As of mid-January 2021, the data summary tables on the IUCN website show 159 bird species listed as Extinct. Another five are listed as Extinct in the Wild. A further 22 are in the enigmatic category of “Critically Endangered (Possibly Extinct).” Of course, those “possibly extinct” birds immediately add some uncertainty to the final tally, but the questions and unknowns actually extend far beyond those 22 species.

To start to understand why, consider the distribution of the bird species that are lodged firmly in the Extinct category. An amazingly high number of them lived on islands. Although most of the world’s bird species—probably more than 80 percent—live in mainland areas, more than 90 percent of known extinctions occurred on islands.

Look at the situation in the United States. How many U.S. birds have been lost to extinction? Ask most birders and they’ll list off Passenger Pigeon, Carolina Parakeet, Labrador Duck, and a handful of others. But in the state of Hawaii, more than 30 species have been lost—probably five times as many as on the entire North American mainland north of Mexico. (Some sources give higher numbers for Hawaii, but they include subspecies as well as full species, plus some birds known only from subfossil remains.)

Although Hawaii’s extinct birds might seem distant and obscure to birders on the mainland, the birds themselves were quite distinctive. Among the Hawaiian honeycreepers—formerly considered a separate family, now known to be related to finches—were some remarkable species. The warbler-sized ‘Ula-‘Ai-Hawane was red and black and pink with a silvery head. The Kona Grosbeak had a huge bill that would put any mainland grosbeak to shame. The Kakawahie and the Laysan Honeycreeper were both flaming brick-red. Several species, including the Lesser Akialoa and the Black Mamo, had absurdly long, curved bills. They were all amazing creatures, but they’re gone forever.

Island birds in general are tragically vulnerable to changes.

In fact, an entire family disappeared: the Mohoidae, or Hawaiian honeyeaters (not to be confused with honeycreepers). These were big, striking birds with rich, loud voices. The Oahu ‘O’o and the Hawaii ‘O’o, for example, were both the size of large jays, black with brilliant yellow markings, and with long, black-and-white tails. One member of the family, the Kauai ‘O’o, survived into the late 1980s, and you can even go online and listen to recordings of its haunting voice. But you’ll never see one alive.

Unfortunately, the Hawaiian Islands have not been unique in suffering such a series of extinctions. Island birds in general are tragically vulnerable to changes. In the island nation of New Zealand, extinctions began in earnest before the IUCN’s start date of 1500: Polynesian people arrived and colonized the islands sometime around 1300, and soon wiped out some of the larger birds, including nine species of huge, wingless moas. The rate of extinction no doubt accelerated after European settlement ramped up in the early 1800s. Among the species that survived in New Zealand into the 20th century were the Laughing Owl, which apparently pursued its prey on foot, and the Huia, a large songbird in which the male’s bill was short and straight while that of the female was long and curved. But they, and many others, are gone now.

Hawaii and New Zealand were relatively well explored by early naturalists. But the same can’t be said for many island groups, where we have only tantalizing hints of the avifauna that may have flourished in the recent past. The aptly named Mysterious Starling is known from a single specimen taken on Mauke in the Cook Islands in 1825. No ornithologist surveyed Mauke until about 150 years later, and by that time there was no sign of the bird. In the Ogasawara Islands, far south of the main islands of Japan, a few specimens of the Bonin Thrush and Bonin Grosbeak were found in 1827 and 1828, but those species were never seen again. On Kosrae Island in the Caroline Islands, Micronesia, the Kosrae Crake was discovered in the 1820s but never documented after that.

Why would these island birds vanish after being discovered? In some cases, European explorers or settlers hunted the birds themselves. Most of the time, though, the damage was done by other creatures that were brought in, purposefully or not. In Hawaii, introduced birds and an introduced mosquito brought avian malaria, to which the native forest birds had no resistance. On Guam, the brown tree snake arrived around 1949 and became abundant as it ate its way through the island’s avifauna. On other islands, introduced goats, pigs, or other large mammals destroyed habitat. And most often, the culprits were rats. Time after time, rats managed to swim ashore from ships and colonize remote islands, wiping out birds that had evolved in the absence of any such animals. This scenario played out innumerable times among the thousands of islands scattered across the western and southwestern Pacific. It undoubtedly happened many times at islands where no one had made any attempt to catalog the local birds.

Under these pressures, how many bird species vanished without leaving any hints for modern science? We will never know.

While island birds may have disappeared without a trace, a number of mainland birds have gone into limbo—not yet officially declared extinct, but eluding all searches. Among birds in mainland North America, the IUCN list still regards Bachman’s Warbler and Eskimo Curlew as “Critically Endangered (Possibly Extinct),” even though neither species has been documented in the last 50 years. The Ivory-billed Woodpecker doesn’t even get the “Possibly Extinct” tag; it’s just listed as Critically Endangered. Similar levels of uncertainty apply to other mainland birds on other continents. The last definite record of Himalayan Quail was more than 140 years ago, but it’s still not listed as extinct. The Crested Shelduck of northeastern Asia hasn’t been recorded with certainty since 1964, but the IUCN hasn’t given up on it yet. The Pink-headed Duck of southern Asia and the Imperial Woodpecker of Mexico are two more mainland birds that the official lists are still holding in limbo. Cases like these make it harder to say definitively how many species are really gone for good.

A final source of uncertainty in the exact number involves debate about which forms to regard as full species. For example, the Emu is still widespread and fairly common in mainland Australia. Local populations that used to live on Kangaroo Island and King Island, off Australia’s southern coast, are now extinct. Many authorities treat those as subspecies, but the IUCN lists them as full species, adding to the grim total of species lost.

Even here on the North American mainland there’s the case of the Dusky Seaside Sparrow, which used to live in the marshes of northeastern Florida. I made a special trip to see this bird in the early 1970s, when I was a teenager and the sparrow was still regarded as a full species. It had gone extinct by the late 1980s, but by that time, this highly distinctive bird was classified as a mere subspecies of the Seaside Sparrow. Was the change justified? I have my doubts. And around the world there are many more cases like this, involving extinct forms that might or might not qualify as full species. However we classify them, our total bird diversity is still diminished by their loss.

So, to sum up the answer to the original question: How many bird species have gone extinct? We don’t know, and we’ll never know. But we do know that the number has been tragically high, and that humans have played a role in almost all of the modern extinctions. The only silver lining is that we have a lot of experience now, collectively, in what can go wrong, and with enough determination, we can save many species from a similar fate in the future.

War against Obesity – 4 Simple Ways to Help Fat Dogs & Obese Cats Lose Weight
VOTE for the Best Photo of the Month February 2021
Kitten with Rare Condition Strives to Grow Big and Strong and Won’t Let Anything Slow Him Down
Kitten Born in Shelter as Only Baby, Learns to Be a Cat with Help from a Former Foster
Jaguars in Suriname’s protected parks remain vulnerable to poaching