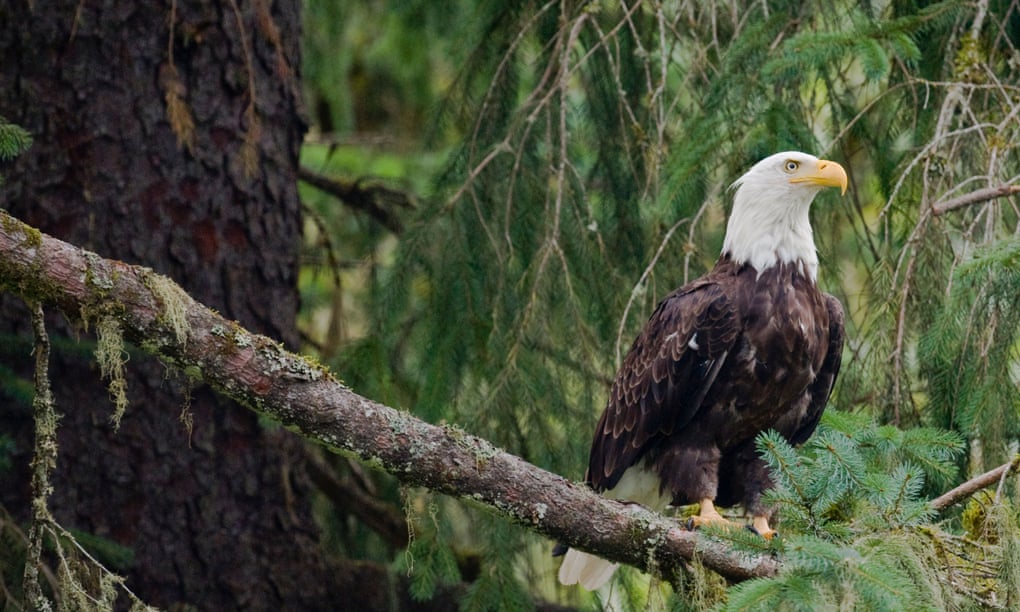 A coalition of Alaskan native tribes, conservation groups and small businesses have filed a lawsuit in an effort to save America’s largest national forest by overturning one of the Trump administration’s most contentious environmental rollbacks.

Protection for the Tongass national forest in Alaska, one of the world’s last intact temperate rainforests, which plays a crucial role in fighting climate change, has been gutted by a recent US government decision to overturn a two-decade ban on logging and road building.

The widely condemned rollback jeopardizes the ancestral homelands of the Tlingit, Haida and Tsimshian people, and threatens the culture and food security of many indigenous communities who rely on the Tongass for hunting and gathering.

The decision to exempt the Tongass from the Roadless Rule, which protects millions of acres of pristine forest nationwide, came after Trump personally intervened following a private meeting with the Alaska governor, Mike Dunleavy, aboard Air Force One.

The subsequent consultation process by the Forest Service was also mired in allegations of funding violations and bias towards the logging industry and the state of Alaska, which has long pushed for the Roadless Rule to be revoked.

Now Earthjustice and co-counsel Natural Resources Defense Council are suing the US Department of Agriculture and the Forest Service on behalf of small businesses in south-east Alaska, more than a dozen conservation organizations and five tribes: the Organized Village of Kake; Organized Village of Saxman; Hoonah Indian Association; Klawock Cooperative Association; and Ketchikan Indian Community.

“The Trump’s administration’s ignored input from tribes and the impact on tribes who rely on the Tongass for hunting, gathering and fishing. It ignored the impact on fishermen, the tourist industry, and the impact on the climate for the whole world,” said Kate Glover, a lawyer with legal nonprofit EarthJustice. “Essentially the decision did not make sense, it was arbitrary.”

The Tongass is considered the “crown jewel” of national forests, sequestering huge amounts of carbon dioxide to keep the global-heating greenhouse gas out of the atmosphere.

Stretching 16m acres over 500 miles, the Tongass is unique for its size and biodiversity, with thousands of islands, waterways, glacial fjords and green valleys flanked by rugged mountains and sprawling forests of old-growth cedar, spruce and hemlock trees. It is home to myriad species including wild Pacific salmon, brown bears, wolves, Sitka black-tailed deer and bald eagles.

“The need for this litigation is a mark of shame upon the federal government for violating the trust and responsibilities it has to the Indigenous peoples of the Tongass,” said Robert Starbard, tribal administrator of the Hoonah Indian Association. “It is equally a stain upon the State of Alaska which colluded with the Trump administration to circumvent scientific analysis to achieve a desired political outcome.”

The Tongass had been safeguarded since 2001, when the Roadless Rule was adopted during the Clinton administration after an extensive public consultation, in which 96% of the 1 million participants nationwide supported protection for unspoiled forests.

Since then tourism has soared to more than a million visitors annually, and the forest supports some of the last productive wild salmon runs in the world, as well as a billion-dollar commercial fishing industry.

The timber industry currently contributes less than 1% to the south-east Alaska economy, compared with 25% by the fishing and tourism industries combined.

Exemption from the Roadless Rule leaves more than 9m acres of forest vulnerable to a new wave of clear-cutting and roadbuilding, and threatens a key buffer against climate change. A 2019 study found that the Tongass absorbs more carbon than any other national forest, on a level comparable to the Amazon.

The Trump administration claims this will benefit the timber industry without hurting tourism and fishing. Yet its own analysis showed that the change would not create significant logging jobs or income, fueling fears that the real reason behind the controversial decision has not been divulged.

“This is not about timber sales; everyone knows that the logging industry is waning and dying. This is about mining,” said Kashudoha Wanda Loescher Culp, 72, a Tlingit activist and Tongass coordinator for the Women’s Earth and Climate Action Network.

“The 2001 Roadless Rule was a victory by the people but by not codifying the protection into law, forests like the Tongass were left deliberately vulnerable and that’s what we’ve seen industry take advantage of through Trump,” added Culp. “This an attack on our peoples and the climate.”

It could take up to a year for the federal court in Juneau to rule on the litigation, leaving the Tongass vulnerable to speculators unless the incoming Joe Biden administration intervenes to reinstate protection.

“If the judge doesn’t overturn the government decision, our way of life will be destroyed,” Joel Jackson, 64, president of the Organized Village of Kake, told the Guardian. “The Tongass has been our home for over 10,000 years, we need to protect what we have left.”

This article was first published by The Guardian on 23 December 2020. Lead Image: A bald eagle perched in a Sitka spruce in Tongass national forest. Photograph: All Canada Photos/Alamy Stock Photo.

Webinar: Heart to Heart: Pet Bird Behavior Q&A with Chris Davis
Kitten Brought Her Sister to the Woman Who Helped Her, and Ready to Leave Street Life Behind
New Zealand: woman dies after suspected shark attack near Auckland
Three men filmed beating dolphin to death arrested in India
Conservation Groups to EPA: Assault on Law, Science, and Public Voice Will Not Be Tolerated