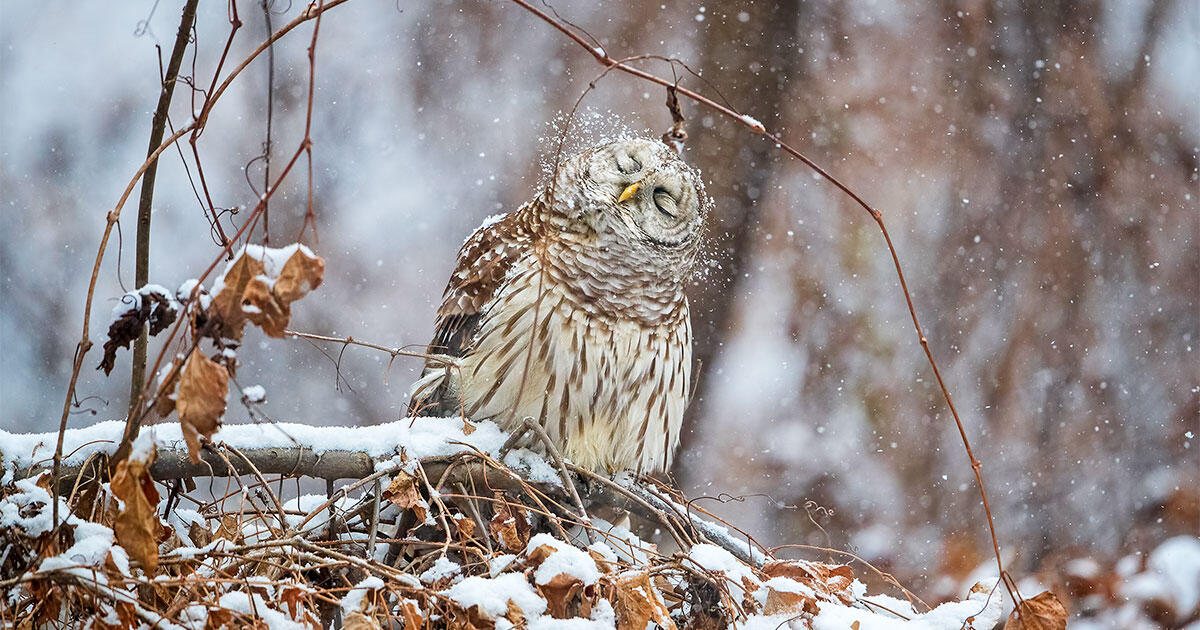 A large owl of the eastern, central, and, increasingly, northwestern United States, the Barred Owl is one of our more common owl species. As with most owls, the Barred is primarily nocturnal, but it is known to call and hunt during the day. Easily identified by its heavily streaked chest, round, tuftless head, and big, black eyes, the Barred Owl can be found in forested areas throughout its range year-round, including in more urban environments. Read on to learn more about this bird, and when you’re done, check out these other fun facts about owls.

1.) If you’re out in the woods and hear someone calling who cooks for you, who cooks for you all?, you’re actually hearing the distinctive call of the Barred Owl. If you hear what sounds like maniacal laughing afterward, that’s usually two Barred Owls performing a courtship duet. Usually.

2.) Barred Owls prefer nesting in tree hollows, but they will also use nests abandoned by other animals, from squirrels to Red-tailed Hawks, and nest boxes located in forest habitat.

3.) These hefty owls can become incredibly territorial once they establish a nest—and especially when they begin rearing chicks. Barred Owls are known to chase away intruders by aggressively hooting or attacking and striking with their talons. (There’s even a theory that a Barred Owl was the culprit in a famous murder case.)

4.) Barred Owls prefer mature forests that have both an abundance of prey and trees with cavities. Barred Owls hunt from a perch, where they sit and wait, scanning and listening for prey, and then silently swoop down when they pinpoint their meal.

5.) Barred Owls mostly eat small mammals like mice and voles, but sometimes they go fishing for crayfish and crabs. If a Barred Owl eats enough crayfish, the feathers under its wings can turn pink—just like a flamingo, which gets its hue from the high volume of shrimp in its diet.

6.) Barred Owls are largely sedentary, but in the past century, they have gradually expanded their range. The expansion began west across Canada and then south into the states of the Pacific Northwest, reaching California by the 1980s. This poses a problem for the bird’s smaller cousin, the Spotted Owl, which is endangered and also relies on old-growth forests. Barred Owls force Spotted Owls from their territories and can also hybridize with them.

7.) Barred Owls mate for life, and they usually have a single clutch of two or three white eggs each year. During the incubation period, which lasts somewhere between 28 and 33 days, the female sits on the eggs while the male hunts for food.

8.) After they hatch, young Barred Owls can stick around the nest for up to six months, which is unusual for owls. During this time, the young owls rarely stray far from each other and are often seen sitting side by side.

9.) Hatching order often determines chick size: The oldest of a Barred Owl clutch tends to be the largest, with the other chicks being progressively smaller. Adult owls can grow to an impressive 20 inches tall—big enough to terrify an unsuspecting person wandering in the woods.

10.) Chicks leave the nest at four to six weeks old, but they don’t go far: Once they leave the nest, these talented climbers clamber about their nest trees (or a nearby tree if they fall to ground), using their bill and talons to grab hold while flapping their wings to keep balance. At 10 to 12 weeks, they begin flying.

Bonus Fact! Historians believe that Harriet Tubman, an avid naturalist, used the Barred Owl’s call as a signal for people seeking to use the Underground Railroad. Depending on the call she used, freedom-seekers would know whether it was okay to come out of hiding.

Kittens from Different Families Found Each Other and Decided They Would Never Be Apart
Petition: Startling Animation Shows Blue Whale Dodging Ocean Traffic
The Terrifying Truth: Our Future is Tied to the Future of Sharks
Webinar: Grey Parrot Anatomy Project: An Update & Relevance to all Parrot Species
Kitten Found in Window Well Wins Over Family that Saved Him, and Blossoms into Beautiful Cat